Research indicating that dogs are capable of detecting evidence of coronavirus infection is being tested in a practical sense at Helsinki-Vantaa airport.

The University of Helsink has studied the use of dogs in coronavirus testing and a Finnish organisation called Wise Nose specialising in sniffer-dog training, has started large-scale work to produce ‘corona dogs’.

Finnish airports authority Finavia has started a trial at the capital hub, expecting the dogs to “speed up” the identification of passengers infected by the virus.

“As far as we know, no other airport has attempted to use canine scent detection on such a large scale against [this disease],” says Finavia airport director Ulla Lettijeff.

Passengers undergo a sample swipe on their skin, which is then given to the dog in a separate booth, avoiding direct contact and preserving anonymity. 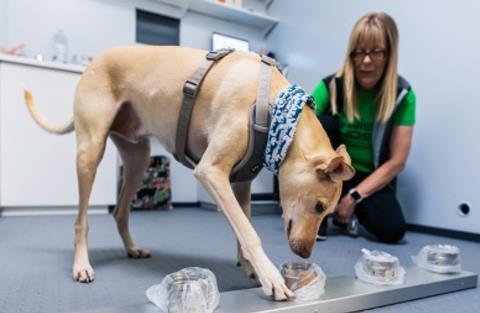 French researchers undertook a proof-of-concept study, published in June, to evaluate whether coronavirus could be traced in sweat by sniffer dogs.

Most of the dogs used were Belgian Malinois shepherds, mainly because the breed is well-represented in French working-dog circles. But the study says: “Lots of canine breeds or mongrel dogs could develop the same olfactive detection qualities.”

Eight dogs were used to perform 368 trials, during which they were tasked with finding a positive sample in a line containing several other negative samples. Four dogs achieve a 100% rate, with the others’ successes ranging from 83-94%.

The study says this is “significantly different” from the result which would be obtained purely by chance, and concludes that there is “very high evidence” that the sweat of coronavirus patients differs from uninfected individuals’ and that dogs “can detect” sufferers.

Preliminary results from another study from German institutions, notably Hannover’s University of Veterinary Medicine, have shown similarly promising results. It used eight dogs trained for a week to detect saliva or tracheobronchial secretions of coronavirus-infected patients.

Presented with 1,012 randomised samples, the dogs achieved an overall average detection rate of 94% with 157 correct positive indications and 792 correct negative rejections. The remaining 63 were either false-positive or false-negative, split almost equally.

“Obtaining [current virus-testing] results is time-consuming and can be cost-prohibitive, especially for developing countries,” the study says.

“There is therefore a need for an additional faster, reliable, non-invasive, and versatile screening tool – especially to identify asymptomatic and pre-symptomatic individuals.”

Several Finnish institutes, including Wise Nose and research departments of a number of universities, signed a co-operation agreement in spring this year to carry out a collaborative study on dogs’ ability to detect coronavirus.

Finnish veterinary operator Evidensia is funding training and experimental work, which has evolved into testing at Helsinki-Vantaa airport.

“Training activities started on a voluntary basis and [corona] dogs do not have the status of a service dog, which has brought challenges to public funding of the training,” points out Wise Nose.

Wise Nose executive director Susanna Paavilainen says it is working with Finland’s customs authority to prepare for a possible scenario in which customs personnel formally take over the sniffer-dog operation, although official testing with trained dogs requires a legislative amendment.