Though Eviation cleared a major milestone with the 27 September first flight of its all-electric prototype aircraft, the company’s chief executive stresses that notable battery hurdles must still be overcome.

“It was good on the numbers,” newly appointed Eviation chief executive Gregory Davis says. “The flight-test plan was executed flawlessly.”

According to flight tracking website FlightAware.com the aircraft (N882EV) flew for about 8min, climbing to 2,800ft above ground level before landing safely back at Grant County.

Speaking after the flight, Davis says Eviation aims to begin Alice certification test flights by 2025 and to start deliveries in 2027.

But, he cautions, achieving that goal will require improved batteries.

Eviation, based north of Seattle in Arlington, Washington, had teased for several months that Alice’s first flight was imminent, with the milestone never seeming to arrive.

Before getting airborne, Alice had pulled onto the runway only to return to a staging area. Davis says his team needed to “reset a screen that we wanted to change the configuration of for that first flight”.

It then taxied out again, accelerated under full power and lifted into the sky. 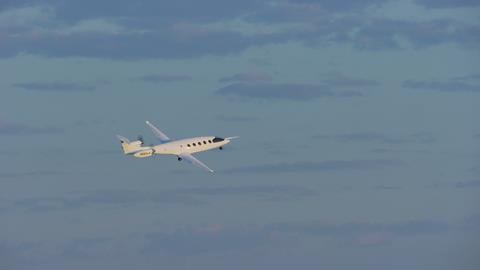 Davis says the maiden flight was Eviation’s first chance to fully test how Alice’s propulsion system, including its batteries, and its fly-by-wire controls perform in real-world conditions, and how the systems interact.

“We have been able to test the actual controllability,” Davis says. The company will next determine if the aircraft’s performance data matches expectations.

The project has already been delayed, including by a January 2020 fire involving lithium-ion batteries on another prototype, which ignited during testing at a site in Prescott, Arizona, destroying the aircraft.

Eviation now expects to begin Alice’s flight-test programme “in or around 2025”, Davis says. It plans to assign three aircraft to the effort: the prototype and two manufacturing-representative variants, which will be copies of the aircraft Eviation intends to produce and deliver. 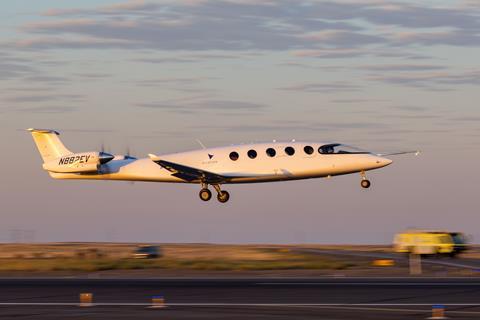 Eviation is pursuing certification under US Federal Aviation Administration Part 23 rules, which apply to aircraft with no more than 19 seats.

“The biggest challenge Eviation has to overcome is the batteries,” he says. “We really do need the industry to boost the energy density of the cell level.”

“We need companies to start looking at how they are going to apply those batteries specifically for aerospace applications,” he says.

Story corrected on 28 September to note that Alice intends to begin certification test flights in 2025, not to have Alice certificated by then.