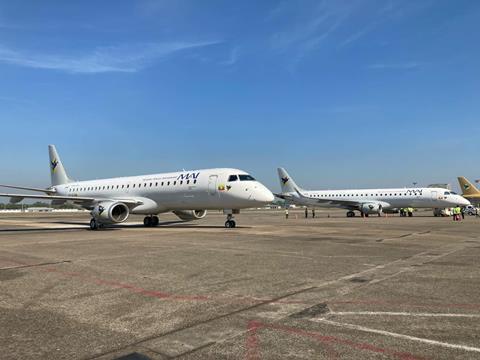 “Our pilots, cabin crew, maintenance crew and our staff are proud to take MAI’s E190 to the skies and to serve our passengers with an enhanced flying experience,” he says.

“We look forward to a productive partnership with Embraer. The operation of the E190 marks yet another important milestone in MAI’s fleet expansion strategy and domestic jet network growth. As the demand grows, we plan to scale up the frequency of our E190 operations to eight flights a day.”

The airline also took delivery of its second E190 on 23 December. The two aircraft bear the registrations XY-ALO and XY-ALP. The airline plans to use the type on domestic routes.

To prepare for E190 operations, eight MAI pilots underwent a month of training in Zhuhai, China. Embraer also conducted a “license-engineer type course” for the airline’s engineers. It adds that MAI is part of Embraer’s ‘Pool Program,’ which provides components, parts, and maintenance.

In addition to the two E190s, the carrier operates three Airbus A319s and a single A320.

Corrected: a previous version of this story incorrectly stated there are four E-Jet operators in the Asia-Pacific outside of China.  There are significantly more than four, but four new ones have been added in 2020.