Aeroflot Group’s budget carrier Pobeda is to cut back its operations, putting 40% of its fleet into storage and trimming its network in response to the constraints on Russian air transport.

It will maintain services with 25 Boeing 737s but park 16 others. The airline will also suspend the transfer of an additional 20 Aeroflot 737s into its fleet.

Pobeda says its Moscow services will be conducted exclusively from Vnukovo airport, and that operations from Sheremetyevo will be temporarily moved from 8 April.

Concentrating the operation at a single base airport, it adds, will enable the airline to operate the fleet more efficiently and meet the changes in demand. 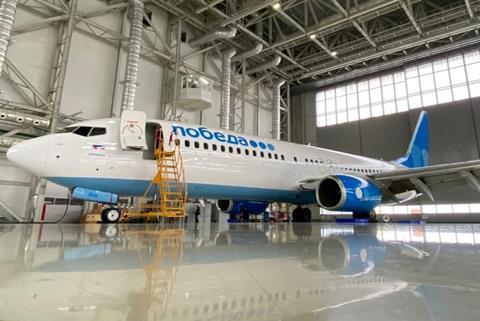 Pobeda acting general director Andrei Yurikov says the decisions were “not easy to take” given the success of the low-cost carrier’s operations – the airline had demonstrated a strong recovery from the effects of the pandemic.

“But these necessary temporary measures will allow the company to safely go through a difficult period,” he adds, pointing out that the pandemic gave the company experience in taking “radical” measures.

“We are doing everything possible to avoid cuts in our team, and we will keep the aircraft in airworthy condition in order to return quickly to the previous pace of development as soon as possible.”

Pobeda passengers flying from Sheremetyevo to Barnaul, Nalchik, Vladikavkaz, Cheboksary and Petrozavodsk will be offered an alternative from Vnukovo. Aeroflot will expand its network to pick up other Pobeda services from Sheremetyevo.