Two Icelandair 767s to be converted to freighters in leaseback deal

Icelandair Group has reached a sale-and-leaseback agreement for a pair of Boeing 767-300ER which will be converted into freighters.

Icelandair Group says the 767s will be converted in spring next year and be re-introduced, to the fleet of Icelandair Cargo, in September 2022.

“Until then, the aircraft will be operated within Icelandair Group’s passenger network and leasing operations,” the company states.

There are four 767-300ERs in the Icelandair fleet – registered TF-ISP, TF-ISO, TF-ISN and TF-ISW – all of which are fitted with General Electric CF6. 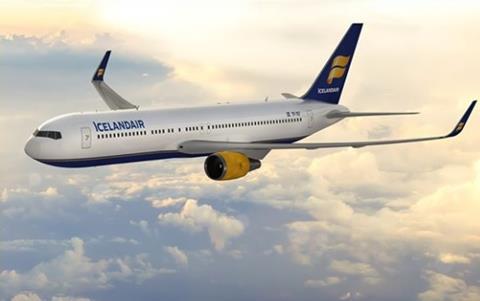 Icelandair Group says the lease period for the twinjets is 10 years. “The agreement will have a positive impact on [our] liquidity,” the company adds.

Chief executive Bogi Nils Bogason says the 767s have 50% more capacity than the 757 freighters and “fit very well” into the network.

“I am confident that the 767-300ER freighters will allow us to maximise new opportunities in our markets,” he says, adding that the company wants to “strengthen” Iceland as a cargo hub.

Titan Aircraft Investments is a joint venture between Atlas Air subsidiary Titan Aviation Holdings, which has 21 767-300ERs, and Bain Capital Credit. Terms of the sale-and-leaseback have not been disclosed.