At the 2016 Farnborough air show, AirAsia talked about setting up a China subsidiary to capture the market's booming demand for air travel. Then, its newly appointed north Asia president, Kathleen Tan, told FlightGlobal that the goal was the venture within 24 months, but warned that Chinese regulations "may take a while".

Ten months on, AirAsia appears to be making progress. While no firm deal has been signed, it has entered a memorandum of understanding with two Chinese partners to set up a low-cost carrier in Zhengzhou. They are China Everbright Group – a government-backed financial services conglomerate that is a major shareholder in China Aircraft Leasing – and the Henan Government Working Group.

Under the deal, the parties will incorporate a joint venture known as AirAsia China. Besides the airline, the unit will also invest in aviation infrastructure, including a dedicated low-cost terminal at Zhengzhou airport, an MRO facility and a training academy.

It is unclear how big a stake AirAsia will hold and how much each party will invest, but getting such an agreement set up in China is in itself commendable. If all goes through, AirAsia will be the first foreign carrier to set up a joint venture carrier in China.

"China doesn't just open its doors to foreigners… so I think in that sense it's already an amazing feat that they are able to even get to this MoU stage," says Maybank Investment Bank analyst Mohshin Aziz.

"Secondly, the partners are government-linked companies, so this tells us that there's another dimension to it, that it has government backing and support."

Such government support is crucial in a highly regulated market where airlines need approval for almost every move, from incorporation to where they fly, and how fast they add aircraft.

Having Zhengzhou as its base is an interesting choice, which most likely was not AirAsia's to pick. The second tier city has a population of 9.4 million, but is not known as an economic powerhouse or for being a tourist draw.

The carrier has no disillusions about snagging slots for a base in the golden triangle of Shanghai, Beijing or Guangzhou, or even in more popular second tier cities such as Chongqing, Chengdu or Hangzhou. In fact, group chief executive Tony Fernandes, in talking about his interests in China, had hinted that the carrier is "not interested" in the big metropolitan cities.

"What AirAsia is good at is developing secondary and tertiary markets, providing connectivity where there isn't," he said.

In the group's 14 May announcement, Fernandes says Zhengzhou is a strategic location since it sits at the centre of a vast rail, highway and air transport network that forms the linchpin of China's development plans for its central and western regions. The airline also expects Zhengzhou to become even more important, with China's One Belt, One Road policy. 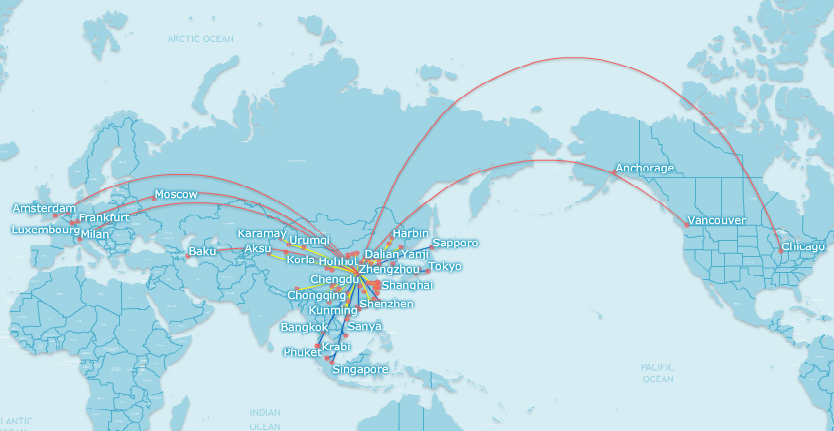 Capstats data shows that capacity out of Zhengzhou Xinzheng International airport has more than doubled from 7 billion in 2010, to 17.6 billion last year. It is one of China's top 20 busiest airports.

FlightGlobal schedules data shows that the majority of services out of Zhengzhou are domestic, but that it also has intercontinental connections to Chicago, Vancouver, Anchorage, Amsterdam, Luxembourg, Milan, Frankfurt and Moscow. There are also regional services to Thailand, Singapore and Japan.

China Southern Airlines is the largest operator out of the city, accounting for 23.3% of seats. Hainan Airlines (8.4%), West Air (8%), and Xiamen Airlines (6.3%) follow. Lucky Air and West Air are the only two low-cost operators out of the airport.

The AirAsia group is also no stranger in China, with AirAsia, AirAsia X, Philippines AirAsia, Thai AirAsia and Thai AirAsia X already flying to 14 Chinese cities from nine points in Thailand, Philippines and Malaysia. Its ASKs into the country have grown from 2.4 billion in 2010 to 8.3 billion last year. 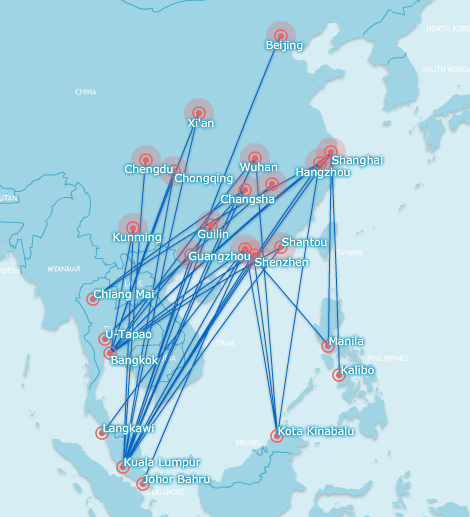 Mohshin points out, however, that while China presents great opportunities with its 1.3 billion population, finding success in the country "is not a walk in the park".

"Zhengzhou is in the best case scenario a second tier city, but many would consider it third tier. From a geographical point of view, it is similar to Atlanta in the US where it is the crossroads for rails a long time ago, and the crossroad for the turnpike system… so to have a functional airport hub makes a lot of sense. In reality it is probably going to cater only to second and third tier Chinese cities," he says.

He adds that while AirAsia is already known in China for international services, it must get a good footing in the domestic market. One element, he adds, is having a "likable" local CEO. This will help the perception that the carrier is local, an not a foreign offshoot. The airline has also said that it has "started exploring" the in-development Comac C919, which signals its understanding that you need to give, to win in China.

Industry players FlightGlobal spoke to believe that the Chinese market is big enough for another player, especially a true low-cost one like AirAsia. While the government has made a push for local LCCs in recent years, most such operators provide what amount to modified full-service models. They add however that local airlines would likely oppose the set-up, or lobby for some level of protectionism.

Some would argue that AirAsia should get its house in order before setting up another subsidiary, considering its Indonesia, Philippines and India units are still in the red, while AirAsia Japan remains on the ground despite years of prep work. Just three months ago, AirAsia also announced plans to start a Vietnam joint venture in 2018, after striking a deal with two local companies.

Fernandes, however, sees the Chinese venture as the "final piece" of the AirAsia puzzle. With the unit, it will connect passengers across Asia Pacific, providing it with a foundation to "drive growth" and "catapult change" in the region.

While it may have its hands full at the moment, one does not turn down an opportunity when it comes knocking in the form of China. It is still too early to see if AirAsia China will indeed take flight, but if it does get airborne, AirAsia must do all it can to make the most of this golden ticket opportunity.