Deriving its name from the Latin "insula maior" or "larger Island", Majorca has certainly loomed large in the sights of Europe’s airlines in recent years, especially after Air Berlin signalled its withdrawal from the market last year.

The now defunct German carrier made Majorca one of its bread and butter leisure markets from the outset, opening a base on the Spanish island in the 1990s and operating its "Mallorca-Shuttle" to and from 12 German cities from 1998.

However, the decision by Air Berlin to withdraw from southern leisure European markets in 2017 in favour of its Austrian subsidiary Niki sparked something of a feeding frenzy by rival carriers, which have rushed to open their own bases on the Spanish island or add more capacity. 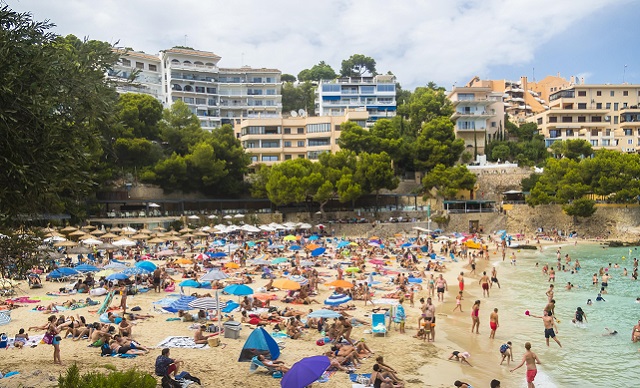 This trend has been further exacerbated by the continuing popularity of the Spanish island with European tourists seeking alternatives to destinations in Turkey, Egypt and elsewhere in North Africa that have experienced political turmoil or terrorist attacks in recent years.

Eurowings reacted to Air Berlin’s closure of its Majorcan base and focus on long-haul markets such as Dusseldorf and Berlin by opening its own base there in March 2017 which now stands at four A320s stationed at Palma de Mallorca airport.

This represents the Lufthansa subsidiary’s first base outside of its traditional home markets of Germany, Austria and Switzerland.

"It [the base] is performing very well, we made money from the very beginning there," Oliver Wagner, Eurowings chief commercial officer told FlightGlobal on 18 April. He says establishing a base at Palma de Mallorca was a "logical" choice given the "decentralised" nature of Germany with its multiple city markets.

Wagner says a base on Majorca allows Eurowings to serve not just the main markets but also smaller cities such as Leipzig, Paderborn and Dresden effectively.

"It was a chance for us to serve these smaller markets out of Palma and that has been really a success - what we did was to conquer new markets for Eurowings in these central areas," he says.

"They [Air Berlin] never gave up Majorca, they just moved it to Niki," he adds.

"Majorca for instance we call it an additional Bundesland for Germany because there are so many Germans having a holiday there, or even living there," he says.

"What we do see was that leisure traffic into Spain was very strong last year also because other parts of the world were perceived to be less secure" he adds.

Kreuzpaintner says the "strategic" decision by Eurowings to open a base on the island was part of wider push by Lufthansa to use the budget carrier to regain market share that was lost many years ago.

But it is not just Eurowings that has established a base on Majorca. During the summer of 2017 German leisure carrier Germania deployed a Boeing 737-700 on the Spanish island - its first base outside of Germany.

The same year EasyJet established a seasonal base on the island, stationing 120 staff comprising pilots and flight attendants at the gateway on local employment contracts from March until October.

Ryanair has added two aircraft to its Majorca base this summer, bringing the total number of narrowbodies stationed on the island to 10. This has allowed the budget operator to add services to Berlin Tegel, Dusseldorf, Luxembourg, Nuremberg, Strasbourg and Stuttgart. In total it will operate 56 routes to and from Majorca this summer.

Thomas Cook has gone a step further by establishing an entirely new airline based at Majorca called Thomas Cook Balearics. The carrier received its air operator’s certificate in March and will initially operate a fleet of five A320s on behalf of other airlines in the group such as Condor.

Speaking to FlightGlobal in February, Thomas Cook chief airlines officer Christoph Debus says it was the desire by the airline to more efficiently match capacity with demand and do away with short-term wet leases from third parties.

Debus says the new airline will initially serve the German leisure market, such as Hannover, which has grown "massively", but will also be used by Thomas Cook airlines serving the UK and Scandinavia. He says that from a geographical perspective, Spain is a "good" location for such a leisure-focused base. Having whittled its choice down to basing the airline in either the Balearic or Canary islands, Debus settled on Majorca which was simply "easier to get to".

Debus says the aim is that Thomas Cook Balearics becomes a streamlined part of the wider business; to the extent it is not even recognisable as a separate airline.

"With our livery, you won’t recognise it. It’s just a platform which will fly for one of our airlines, in one of the market on a wet lease basis, but internal wet lease".

Debus says other advantages of opening a base on Majorca was the "overhead" function, as Thomas Cook already runs its finance and accounting business from the Spanish island. The attraction of Majorca as place to live was also an advantage when recruiting pilots and cabin crew, he adds.

While some airlines have gone so far as to establish bases and entire airlines on Majorca, others have been content to drive up capacity to the island from elsewhere.

Austrian regional carrier Laudamotion, which has taken over some of the assets of former airline Niki, began operating earlier this summer and made Majorca a main focus with flights programmed from Basel, Berlin Tegel, Cologne, Dusseldorf, Frankfurt, Graz, Hannover, Innsbruck, Linz, Salzburg, Stuttgart, Vienna and Zurich.

Behind them are Vueling and EasyJet, followed by Condor, Air Europa and Jet2 among other significant players in the market.

It also shows that Majorca is not served by a scheduled long-haul operator and no airline routinely serves the market with widebody jets. Lufthansa though plans to deploy Airbus A340-600s on six of its return Munich flights over the Whitsun holidays during the end of May and early June.

The data also shows that despite the collapse of Air Berlin, Niki and Monarch last year, seat capacity into the Majorcan market continues to grow and will reach 32.7 million this year. 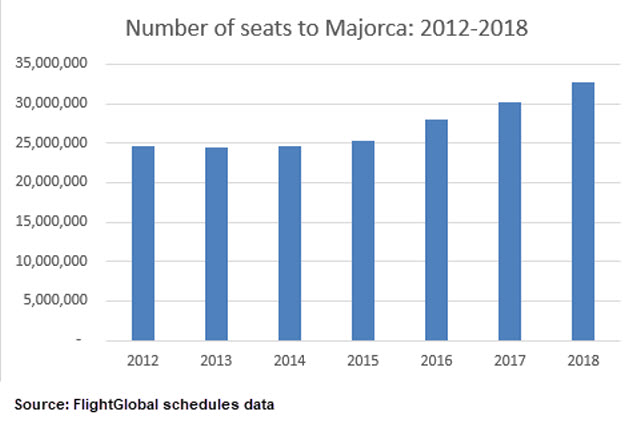 Of the top 10 most popular routes by seat capacity from Majorca, Barcelona is the biggest with 109,000 seats a month. But the German market is by far the biggest, with seven of the top 10 routes linking to German cities, including Dusseldorf, Cologne and Berlin. 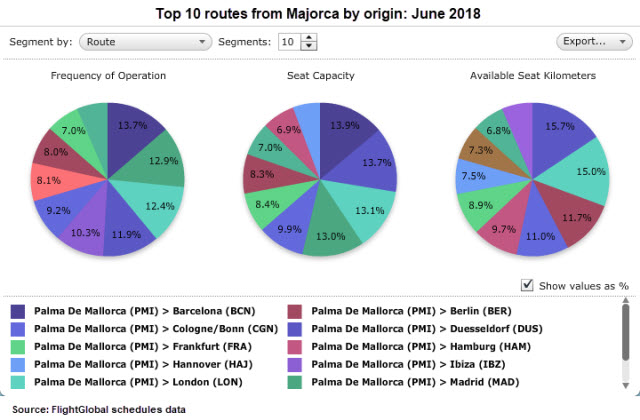 Data from Spanish airport operator Aena for 2017 shows that just under 28 million people visited the Balearic island in 2017, making it the third most popular destination in the country after Barcelona and Madrid.

With ever more competing airlines adding more capacity into the Spanish market over recent years, is there a risk of yields becoming unsustainable?

"I think leisure destinations were always competitive and always will be competitive, but I think now with the offer of Eurowings where we have very competitive cost structures on the hand one hand and on the other very positive perceived customer product on the other side, this gives us basically the ability to gain market share back which we lost years a go".

Debus says Thomas Cook has on the whole managed to successfully pass on the increased costs associated with the fall in sterling value to customers on flights serving leisure destinations in southern Europe, even with the drop in the value of sterling since June 2016.

He notes that the leisure carrier has been benefited from the exit of Monarch from routes to the Canaries, Majorca and certain parts of Greece where they had been competing "wing to wing".

Whether Majorca can sustain such growth in capacity in the long-term is an open question, but at present airlines continue to put their faith in adding capacity into the market. As Lufthansa chief executive Carsten Spohr said at the airline group's recent full-year results presentation: "If you want to go to Majorca this year, you have never been more spoiled for choice".