Forty years after the type’s introduction to service with the UK, the Royal Air Force’s last Panavia Tornado strike aircraft have made their final operational flights and headed for retirement.

A milestone sortie conducted from the RAF’s Marham base in Norfolk on 28 February marked the last outing for the Cold ­War-era stalwart, which had until a month earlier been involved in deployed combat duties almost continually since 1991. 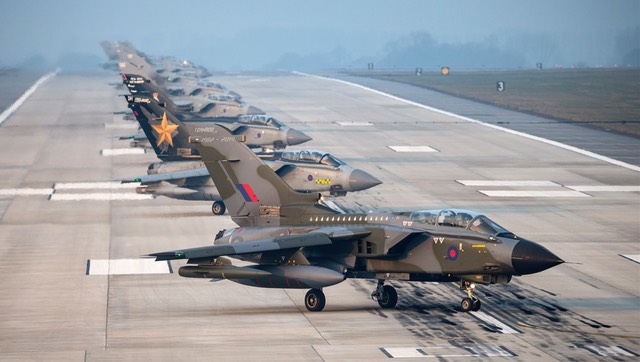 For the farewell flight, a “diamond nine” formation of Tornado GR4s performed a number of local flypasts. A week earlier, a broader ­series of three-ship flights had been conducted around the UK, as part of the retirement preparations.

Bidding farewell to its venerable assets, the RAF noted that since making an offensive debut during the first Gulf War of 1990-1991, its Tornado force had accumulated some 185,603 flight hours on operations. In addition to duties over Iraq, the type was also ­involved in active duty in Afghanistan, Kosovo, Libya and Syria throughout its service life as a ground-attack platform, with air defence variant (ADV) fighters also having protected the UK and the Falkland Islands and served in enforcing a “no-fly zone” over Iraq between 1999 and 2003. 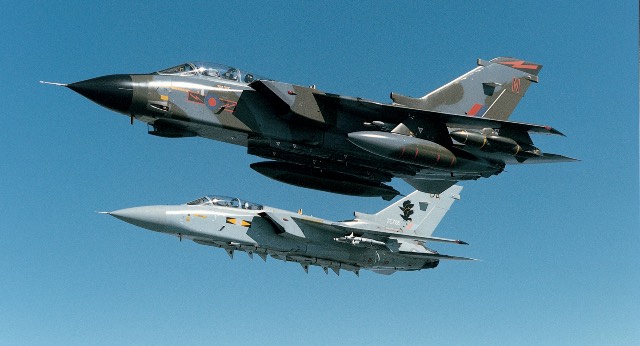 A final eight combat-tasked GR4s returned to the UK from RAF Akrotiri in Cyprus in early February, with their duties over Iraq and Syria having been assumed by the service’s Eurofighter Typhoons. On 19 February, the latter type for the first time engaged an Islamic State target in Iraq with MBDA’s Brimstone air-to-surface missile, destroying a boat being used by militants. Longer term, the UK’s Lockheed Martin F-35Bs will also become available for such tasks, having achieved initial operational capability for land-based operations with Marham-based 617 Sqn towards the end of 2018.

Through the course of its operating life, the two-seat Tornado evolved from an original GR1 version, optimised for Cold War duties including night-time terrain-following flight for the delivery of WE177 atomic bombs, and later JP233 runway-denial weapons, to an enhanced GR4 model equipped for precision strikes using modern weapons. In its latter years, the aircraft was employed for the delivery of Brimstone and MBDA’s Storm Shadow cruise missile, and Raytheon Systems’ 250kg (500lb) Paveway IV precision-guided bomb, while carrying the Rafael Litening III targeting pod and advanced countermeasures equipment for self-protection.

Such weaponry could only have been dreamed of at the time of the Tornado’s conception via the Multi-Role Combat Aircraft (MRCA) programme between Italy, the UK and the then-West Germany via a memorandum of understanding signed in May 1969. After studying a variety of designs, the ­nations settled on a variable geometry configuration, which was intended to meld low-speed handling characteristics with supersonic performance vital for strategic missions.

Power came from a pair of Turbo-Union RB199 turbofan engines, produced by a ­consortium formed by Fiat Avio, MTU and Rolls-Royce.

In a major overview of the MRCA programme published by Flight International on 28 March 1974 – five months before the type’s debut – our reporters noted: “The first flight is judged to be a psychological watershed which has to be negotiated before the three countries feel that they can go on to the next phase, with its long-term commitments to prototype flying, and the build-up of production investment.” Pointing to challenges including development problems with the RB199, industrial disquiet over the selection of a US-sourced attack radar from Texas Instruments, and uncertainty over the strength of order commitments from Germany and Italy, our editorial noted: “Europe is everywhere committed to increasing interdependence. In the field of high technology it is aviation which is making the running.”

A 30min first flight took place on 14 August 1974, from MBB’s Manching plant near Munich, involving the programme’s first of nine development aircraft. The first of four British-built examples, P.02, took to the air for the first time on 30 October the same year from the BAC plant at Warton, Lancashire. The UK company’s chief test pilot, Paul Millett, was at the controls for both first flight events.

Flight International reported the MRCA’s UK debut as having been delayed by a week due to bad weather, which still played a part in the historic event. “The aircraft was airborne at 0812hr and landed 1hr later as the weather began to close in again. The initial flight plan called for a climb to 20,000ft… but it was revised to keep P.02 below 8,000ft and in clear air for its initial trials.” During the sortie, “the wings were cycled through their maximum travel and the handling with high-lift devices checked. Transient manoeuvres such as Dutch rolls, sudden pitch changes and wind-up turns were also made”.

With the MRCA programme making advances after the cancellation of the UK’s BAC TSR-2 strike and reconnaissance aircraft a decade earlier and the abandonment in 1968 of a planned purchase of the General Dynamics F-111K, prime minister Harold Wilson described the multinational effort’s product as “one of the wonderbirds of aviation” and “cheaper and better for us than any alternative plane”.

In our pre-flight review, we noted another challenge that the Tornado’s developers faced during testing: “With increasing resistance to noise and loss of amenity, the problems of r­econciling low-altitude supersonic flying and weapons trials with local interests get increasingly harder to solve in the skies above a populous Europe.”

As such, our writers summarised, “The onus for verifying performance above Mach 1 will largely reside with Britain.”

Looking to the performance required of the type’s avionics, our writers noted: “The system’s most demanding mission is certainly high-speed, all-weather penetration at extreme low level, culminating in a single-pass delivery on a point target.”

The type entered operational use in 1979, and over the life of the programme, just shy of 1,000 examples were produced for the three partner nations and Saudi Arabia; the type’s lone export operator. Via its Al Yamamah arms deals with the UK government, it acquired both the IDS and ADV models. In 1998, BAE Systems handed over Riyadh’s last Tornado – the final example to be built, 19 years after the programme’s first production aircraft, BT001, had emerged from its Warton site.

The RAF introduced the GR1 as a successor to its Avro Vulcans, and later also fielded the F2 fighter, as a replacement for the McDonnell Douglas F-4 Phantom. The air-defence version was later modernised to the improved F3 standard, with operations of this type – latterly armed with Raytheon AIM-120 AMRAAM and MBDA ASRAAM air-to-air missiles – coming to an end in 2011, after a 25-year service life in which it never fired a shot in anger.

Cirium’s Fleets Analyzer shows that the UK’s total commitment to the Panavia programme was for 403 examples, including development aircraft. This made it the largest recipient of the type, followed by Germany (367), Saudi Arabia (120) and Italy (102). 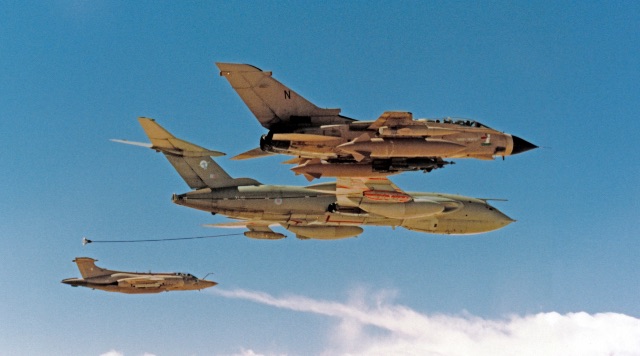 A first offensive use by the RAF came during the first Gulf War, when 60 of its Tornados were forward-deployed for missions flown from bases in Bahrain and Saudi Arabia. These logged more than 1,500 sorties throughout the conflict, during which time six aircraft were lost, and five crew members killed. ­Armaments used included ALARM anti-radiation missiles and runway-disabling JP233s. A handful of GR1s also gained the TIALD thermal imaging and laser designation pod, while others operated alongside RAF Blackburn Buccaneers, which provided target designation support during releases of Paveway-series laser-guided bombs.

Aside from the use of so-called “Show of force” tactics against the Taliban in Afghanistan almost two decades later, the UK’s Operation Granby marked the last time that RAF strike aircraft employed low-level tactics, favouring instead the relative safety of medium-altitude operations, afforded by the increased accuracy and range of modern weaponry.

By then upgraded to the GR4 standard, the UK’s ground-attack aircraft played a part in the opening salvoes of the second conflict with Saddam Hussein’s forces in Iraq. This was a spectacular debut for its Storm Shadow weapons, which allowed pinpoint strikes to be conducted against key infrastructure targets from a launch distance of more than 135nm (250km). 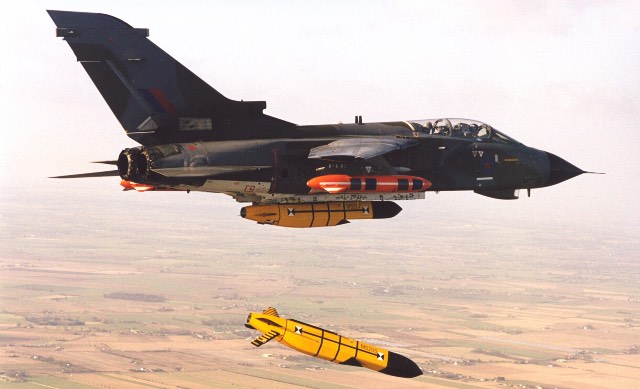 As in the opening hours of the 2003 Iraq War, RAF GR4s also released multiple Storm Shadows against air defence targets at the start of the NATO-led campaign over Libya in March 2011. This involved several aircraft completing 2,600nm sorties mounted from Marham, receiving in-flight refuelling support from Lockheed TriStar and Vickers VC10 tankers. These strikes represented the longest-range offensive tasks conducted by the service since its “Black Buck”-series flights with Vulcans during the Falklands War almost 30 years earlier.

Seven RAF squadrons operated GR4s from Kandahar airfield in Afghanistan between June 2009 and November 2014, logging a combined total of 33,500 flight hours. This was followed almost immediately by participation in the UK’s ongoing Operation Shader contribution to coalition activities over Iraq and Syria.

The considerable political and industrial aspects of the Tornado programme navigated by the Panavia organisation, meanwhile, also cleared a path for future multinational developments such as the four-nation Eurofighter, which added Spain to its earlier partner nations. In-service experience with the type also shaped emerging requirements.

In RAF use, the GR4 – along with the BAE Harrier GR9/A and other, non-strike platforms – represented an opportunity for the military and its industrial suppliers to develop partnering arrangements to reduce maintenance and spare parts demands and boost availability on the frontline. Dubbed ATTAC, the Ministry of Defence’s arrangement with BAE covered maintenance, repair and upgrade activities on the GR4, while a separate deal covered engine support by R-R. The latter returned the final RB199 to have been serviced under its ‘ROCET 2’ availability-based support deal to the RAF last July.

“Over the last 10 years, almost every system has become more reliable, and availability has gone up,” notes an RAF official involved with the Tornado force until its conclusion. “Our understanding of the jet and teamwork with BAE and industry partners has climbed.”

As the service drew down its squadron numbers, it adopted a “spare to repair” model, where retiring aircraft were used as a source of parts prior to being scrapped. This successfully supported operations down to a two-squadron strength of 22 GR4s by the time deployed operations ended in late January.

A decision to extend a third squadron’s operational activities longer than planned, until into 2018, also required careful planning to meet crew requirements, since the RAF stopped training rear-seat weapon system operators for the GR4 earlier this decade. Under one initiative, some personnel who had previously left the Tornado force were recruited back to support operations until its departure from service, including some with experience dating back to the Gulf Wars. 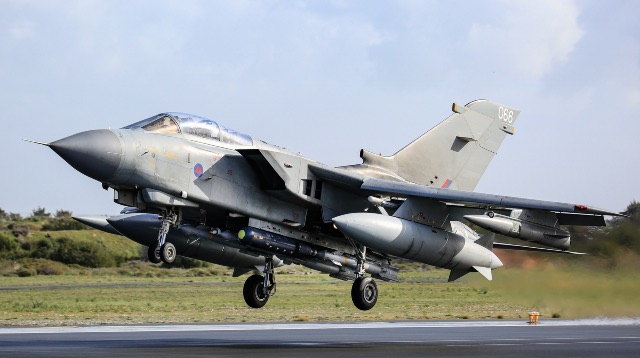 The UK’s last two Tornado units will be disbanded in mid-March. 9 Sqn will swiftly return, re-equipped with the Typhoon, while 31 Sqn will commence duties with the General Atomics Aeronautical Systems Protector RG1 remotely piloted air system early next decade.

While the RAF will not fly another operational sortie with a Tornado, the type is set to remain in frontline use for several more years with the air forces of Germany, Italy and Saudi Arabia. Fleets Analyzer shows around 270 examples remain in use, across the IDS and electronic combat and reconnaissance models.

Saudi Arabia is in the process of acquiring spare parts from the UK following the GR4’s retirement, to support its 81-strong IDS fleet. One source describes Riyadh’s deal as including a “huge amount of kit”, ranging from engines to a wide variety of other components.

After flying the type for the last time late last month, chief of the air staff Air Chief Marshal Sir Stephen Hillier – a former GR4 pilot – said: “I will personally be very sad to see the Tornado retire, but it is time now to pass the baton to our next-generation combat aircraft. The F-35B Lightning is now operational and the Typhoon is now fully multi-role capable and able to take on the Tornado’s missions.”

From its inception as the multinational MRCA 50 years ago, the Tornado evolved into a versatile, adaptable and dependable asset, ­capable of supporting a wide range of tasks for the UK – traits its successors will be hard-pressed to match in the coming decades.