Launched ostensibly as a local alternative to the Pratt & Whitney PW1400G for the Irkut MC-21, the PD-14 is now Russia’s best hope for competing in the global market for commercial turbofans.

United Engines (UEC), the Rostec-owned holding company that controls Aviadvigatel, makes no secret of its plans to use the PD-14 to challenge Western engine manufacturers for market share beyond Russia. In a statement released to FlightGlobal, UEC says the company is targeting engine applications for aircraft manufactured in the so-called BRIC countries (Russia itself, plus Brazil, China and India). 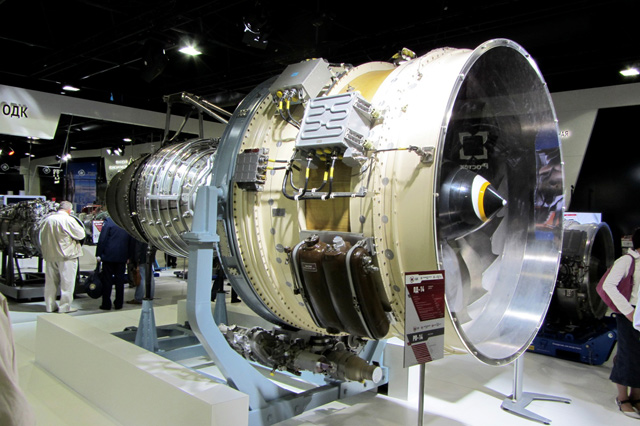 “There are no specific agreements yet, but we are looking forward that after confirmation of the flight performance and economic parameters during the flight tests our international partners will be ready to discuss various options of mutually beneficial co-operation,” UEC says.

A first round of flight testing resulted in 16 total flights that exposed “no serious issues” with the PD-14, UEC says. A second round of flight tests is set to last another three to four months, fulfilling half of a planned two-year flight-test campaign to achieve airworthiness certification.

Aviadvigatel designed the PD-14 to burn 10-15% less fuel than the CFM International CFM56 and International Aero Engines V2500, and to have 14-17% lower operational costs.

“The accomplished [flight] tests entirely confirmed the parameters that had been announced,” UEC says.

The PD-14 lacks the fan drive gear system of P&W’s PW1000G engine family, and the ceramic matrix composites inside the CFM Leap engine family, both of which power the latest single-aisle aircraft manufactured by Airbus, Boeing, Bombardier, Comac, Embraer, Irkut and Mitsubishi. The PD-14, however, incorporates several modern innovations, including hollow, wide-chord titanium blades; 3D-aerodynamic swirlers in the combustor; and cooled, single-crystal alloy turbine blades. The Aviadvigatel-designed nacelles are composed of 65% composite materials.

Despite those improvements, the PW1400G still has significant advantages. Not least, P&W’s geared system allows the front fan to increase in diameter, resulting in a 12:1 bypass ratio.

But Aviadvigatel’s efforts still come close to matching the best that Western engine manufacturers can offer on fuel burn. Bjorn Fehrm, an analyst at Leeham and a former Saab engineer and test pilot, has calculated that the PW1400G exceeds the fuel efficiency of the PD-14 by only 2.5%.

The real test for Russia’s commercial engine revival may involve other parameters besides fuel consumption. GE Aviation, P&W and Rolls-Royce have come far over the past three decades on engine reliability, with a CFM56 expected to remain on the wing for 20,000 flight cycles. Some engines have exceeded 50,000 cycles on wing before requiring removal for maintenance.

“The big question mark will be the reliability of the engine,” Fehrm wrote in an analysis published in February. “Its competitors put the bar very high in this respect.”

The market tends to agree with Fehrm’s analysis. Of 175 firm orders signed so far for the MC-21, two customers have selected the Russian engine to power a total of 27 aircraft. In addition to airline customers, the PD-14 is expected to compete strongly for MC-21s ordered by the Russian government and military.

Russia’s first large turbofan development project in more than 30 years also serves as a valuable stepping stone. The future Chinese/Russian widebody will be powered by either a GE or Rolls-Royce engine, but both countries also plan to build local alternatives. For Russia, that means UEC is already making plans to develop a new engine in the 70,000lb (311kN) thrust class.

“The preliminary work on PD-35 has already been started,” UEC confirms. “As of today, it is in the [research and development] phase.”