Raytheon will deliver the 20,000thcopy of the missile that three decades ago changed air-to-air combat in a 31 January ceremony inside the company’s factory in the desert on the outskirts of Tucson, Arizona.

It is not quite the end of the road for the AIM-120 AMRAAM. Several thousand more of the radar-guided weapons will be delivered to the US Air Force until the programme of record expires in 2024, with deliveries of hundreds likely to continue to foreign operators well into the distant future.

The milestone speaks to the AIM-120 platform’s unusual longevity, spanning three generations of fighters. The AMRAAM was conceived in an era of aerial combat highlighted by Vought F-8s and McDonnell Douglas F-4s, came into service to support a fleet of Boeing F-15s, F/A-18s and Lockheed Martin F-16s and remains the most important offensive weapon for US pilots now climbing into Lockheed F-22s and F-35s.

It has existed for so long the missile has outlived its acronym. Though introduced as a medium-range air-to-air weapon, the AIM-120D that entered service two years ago reportedly extends the AMRAAM’s reach to nearly the range of the retired, long-range AIM-54 Phoenix, whose maximum reach is officially described as in “excess of 100nm [185km]” by the US Navy.

The AIM-120 was designed to change air combat based on painful lessons from the Vietnam War. The original Hughes missile designers introduced a radar-guided missile with autonomous targeting, allowing fighter pilots for the first time to simultaneously fire at more than one target while continuing to manoeuvre. Compared with the Vietnam-era AIM-7 Sparrow, the AIM-120 stretched the “no-escape zone” to dozens of miles.

Its longevity belies the missile’s extensive evolution. The exterior profile of the AIM-120D remains almost identical to the original AIM-120A, except that a version of the preceding AIM-120C introduced clipped fins to accommodate the cramped interior of the F-22 weapons bay. Underneath the surface, however, the AIM-120 has been transformed since the early 1990s with improved sensors, new electronics and a more powerful propulsion system.

Most importantly, the AMRAAM is now equipped with two weapons. It always had a 23kg (50lb) fragmentation warhead that detonates in proximity to or upon contact with an aerial target. Since the mid-1990s, the AIM-120 has also needed the computing intelligence to electromagnetically blast through waves of attempts to jam the missile’s radar.

In other ways, however, the AIM-120 appears almost anachronistic. Although the D-variant's range is reportedly several times longer than the version that entered service 26 years ago, it still falls short of the most advanced beyond-visual-range air-to-air missiles. From Europe to Russia to China, the focus of efforts over the past decade has been to extend the range and manoeuvring power of the radar-guided air-to-air missile to the limits of the most advanced sensors, such as the active electronically scanned array radars proliferating across the world fighter fleets. The preferred mechanism for extending the range has been exchanging the missile’s solid-propellant motor with an air-breathing, throttlable ramjet engine.

The USA has preferred a different philosophy, leading detractors to argue that its approach is anachronistic. The US military’s supporters argue that the AMRAAM offers a more holistic approach to defeating targets, including at shorter ranges. Moreover, ultra-long-range missiles suffer from the limits of rules of engagement (ROE), which often prohibit firing at targets at such distances.

“ROE are probably one of the main reasons why really long range can be rendered pointless, because you may not be allowed to shoot at those super long ranges where you can’t identify friend or foe or if it’s after the first few hours of the war,” notes one source. “The ramjet will give you really long range, but at the shorter range – certainly inside a normal tactical shot – something with a motor like [an] AMRAAM will get to a target much quicker than a ramjet.”

Michael Kofman, an analyst for the US Center for Naval Analysis, points out that the diverging philosophies on missile range derived from opposing military strategies.

“Russia and China always prepared to fight the United States, and countries armed by the United States. Thus they continued development of missiles intended to counter the manner in which the US fights to achieve air superiority. This means long-range missiles for taking out [Boeing E-3] AWACS, jamming aircraft and the like,” Kofman says. 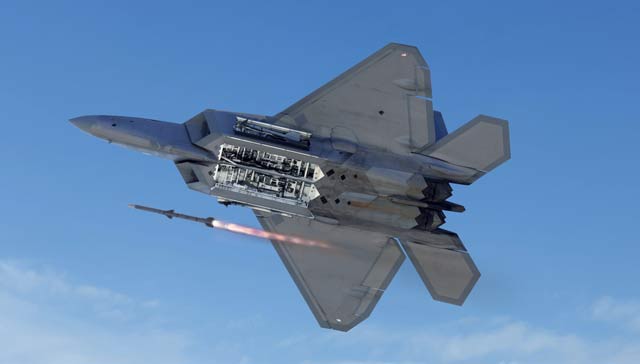 By contrast, the US military became preoccupied with less sophisticated threats, such as the Taliban in Afghanistan. Moreover, the USAF also invested in stealth technology, which “meant that we don't need to shoot from far away, and the range of the AIM-120 is just fine, given they won’t see us,” Kofman says.

Besides range, the lack of a ramjet motor for the AIM-120 means the missile has significantly less energy at long ranges. The AMRAAM’s rocket motor fires for only several seconds after a launch, then glides to the target using the remaining energy. Any manoeuvres made in the terminal phase further reduces its energy. Raytheon counters that the USAF’s focus on anti-jamming technology solves that problem. By having a clear view to the target, the AIM-120 can avoid the need to manoeuvre.

“Whether or not you can get to the range is one thing, but once you get to the target you have to be able to see it to kill it,” a source says. “Our philosophy is reducing the need to make those end-game corrections by having a better intercept.”

But some analysts are not convinced by the AIM-120’s superiority over the constantly evolving jamming threats.

“I don't know how well it works because we've thankfully not had a use case, but suffice to say that if they've spent decades working on how to jam the AIM-120 then they probably have come up with some answers,” Kofman says.

Although the USA has preferred to take a “holistic” approach, Pentagon weapons planners have toyed with the idea of an ultra-long-range air-to-air missile for decades. In the 1990s, the USAF studied concepts for upgrading the AIM-120 with a variable flow ducted rocket: an air-breathing ramjet with a speed-controlling throttle.

In more recent years, the US military considered other alternatives to simply improving the range of its most advanced air-to-air missile. In the middle of the last decade, the focus of modernisation efforts turned to expanding functionality. The USAF launched the dual-role air dominance missile (DRADM) programme in the hope of combining the abilities of the AIM-120 and Raytheon's AGM-88 anti-radiation missile. The US Defense Advanced Research Projects Agency went even further. The science and technology agency launched the triple target terminator (T3) programme, with the goal of replacing the AIM-120 and AGM-88 with the same missile, while adding the capability to destroy small and stealthy cruise missiles.

By 2012, DRADM and T3 were curiously discontinued, leaving some observers to speculate that research was continuing in classified budget accounts. In mid-2016, the USAF's support for a next-generation missile to replace the AIM-120 popped back into the public sphere. Then chief of staff Mark Welsh told journalists attending the Farnborough air show that the service's fiscal year 2018 budget request could revive the formal pursuit of a "sixth-generation" missile, but the desired capabilities remain shrouded in secrecy.

So far, the talk about replacing the AIM-120 is only talk. The missile that entered development in the mid-1970s still has a lot of work to do. The USAF has no plans on the books to roll out an “E” version, but that does not mean that development will stop after the fielding in 2015 of the AIM-120D. The military’s operational testers judged that missile to be effective on entry into service, but improvements are still required. A first software improvement programme (SIP 1) is now being fielded, while SIP 2 – featuring undisclosed improvements to the missile’s electronics – will follow shortly into service.

Beyond SIP 2, Raytheon is developing a new baseline for the processors and circuit cards within the missile. When the form, fit and function replacement is ready to be introduced in a couple of years, it will give the AIM-120’s software developers a more powerful platform on which to develop new techniques and applications.

“You can imagine using this year’s materials instead of five-years-ago materials there will be latent capability that we’ll be able to take advantage of through software as we continue to develop,” an industry source notes.