In 2007, Singapore Airlines (SIA) revealed a startling innovation: a first class “suite” with a lie-flat bed and privacy partitions in the world’s largest and most prestigious airliner, the Airbus A380. The new product, along with updated business and economy classes, set it apart as a leader in cabin interiors. During a champagne-fuelled first service to Sydney, the world got a glimpse of the luxurious and spacious cabin of the future.

Eventually, other airlines – particularly those in the Middle East – surpassed SIA in sheer extravagance, with onboard showers and the like. Singapore’s flag carrier, however, remains a leader in Southeast Asia, although other local airlines have shown a desire to shake up their interiors. This is all part of a global arms race in the industry, where carriers add comfort and other features in a bid to wring a degree of differentiation out of an increasingly commoditised market. The stakes are high, and fought against the law of diminishing returns.

Despite an increasingly competitive market, SIA says it has a distinct edge, stemming from its long experience as a full-service carrier. It also claims to have a strong eye for detail. Indeed, an advertisement campaign by the company in 2014 showed one of the carrier’s iconic flight attendants inspecting leather for seat covers.

When designing the cabin and seat products, SIA says it conducts extensive research and carefully considers passenger feedback, while giving special attention to ergonomics, comfort, convenience and design. It also thinks about passengers’ interests and lifestyles.

SIA believes that the latest generation of seats “reflects the growing expectation of business class travellers in the market today, particularly in having a full-flat seat/bed product and greater privacy for medium- to long-haul travel.” But it was also of the opinion that the future first-class seats “will need to be even better and more exclusive”.

Apart from being durable, the seats need to meet a host of rigorous certification requirements. SIA says those that govern the construction and materials used for seats make designing and developing a new cabin and seat product both “interesting and challenging”.

In an illustration of how competitive the seat market is, just six years after it launched its new product aboard the A380, SIA moved to introduce new first, business and economy class seats. These were fitted onto eight Boeing 777-300ERs that it received from August that year.

Those seats, designed in association with DesignWorksUSA and James Park Associates, covered all three classes. 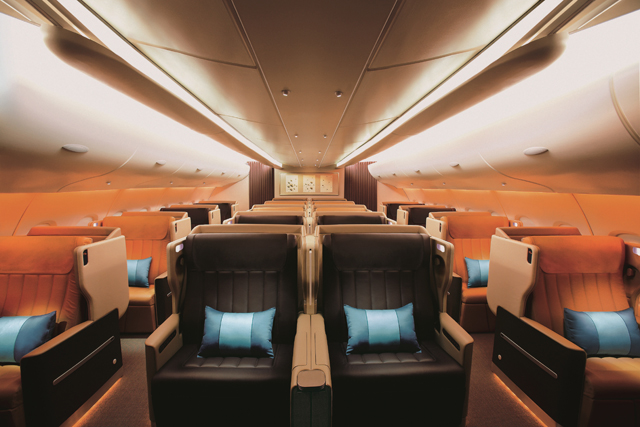 In addition to the seats, it also installed Panasonic Avionics eX3 in-flight entertainment and connectivity (IFEC) systems. Key features included new touchscreen handsets, and the addition of HDMI input ports in first and business classes, as well as USB and eXPort ports. Panasonic’s Global Communication Suite for onboard connectivity was also introduced.

SIA says a key focus is rolling out the 2013 product upgrade across its fleet of 777s. It has also “refreshed” the suites found only on its Airbus A380s, hinting that it is always on the lookout for new cabin products: “We monitor the products out there in the market, but we are not driven by what the competition does.”

Asked if it has plans to have new cabin products, SIA confirms that it is already “working on all-new cabin products.” These, it says, “will be unveiled when the next batch of A380s are delivered in the second half of next year”.

It also confirms the A350s that will be deployed on medium-haul and regional routes will have a different product and seating configuration from its current long-haul examples. Details, however, will “be released closer to their entry into service in 2018”.

SIA’s decision for premium economy was by no means a hasty one. It resisted the idea for years, ostensibly out of concern for cannibalising business class, but eventually came around to the idea.

“We studied a premium economy offering several times over the years,” it says. “Following the last review, it was determined that the time was right for SIA to introduce premium economy as an all-new cabin class. This followed studies that were based on many factors, including route economics, customer demand trends, and the fact that premium economy has been increasing in popularity as a class of travel in parts of the world. Through surveys and feedback from our customers, we knew there would be positive demand for premium economy.”

Nonetheless, some airlines are still wary of premium economy, feeling that it poses a threat to business class yields.

Speaking to FlightGlobal in January, Garuda Indonesia’s commercial director at the time, Handayani, explained that Indonesia’s flag carrier has no intention to introduce premium economy.

“I don’t think that kind of approach is something that Garuda would consider,” she said. “[Having a premium class economy] is comparable to having a business class seat but [with] economy class food. That would ruin the segmentation for us.”

Thai Airways International, on the other hand, does not have a dedicated premium economy class seat. The carrier skirts this by using 18 out of the 42 business class seats on its 777-300ERs as premium economy. This is, however, only available on flights from Bangkok to Copenhagen and Stockholm.

SIA goes on to say that the premium economy offering is best suited on longer-range flights, and on a market segment desiring greater comfort.

“The market segment for premium economy is a mixture of both leisure as well as corporate travellers who want a bit more comfort than the usual economy. The market segments that favour this product would generally be the medium- to longer-haul segments.”

Japan Airlines also announced that 777-200ERs used on international services will be revamped, making the cabin product aboard these aircraft consistent with those used on the carrier’s 777-300ERs and 787s. Its economy class will also feature a different configuration of 3-4-2, compared with the previous 3-3-3 layout. The reconfiguration also means that the total seat count on the aircraft will drop, from 245 or 312 to 236.

Another regional trend, which certainly could dismay passengers, is an effort to lower seat costs and boost yields by packing even more seats into economy class. On the ubiquitous 777, this means a jam-packed 3-4-3 layout, instead of the 3-3-3 customers have been used to for years.

New members of the 777 3-4-3 club include Air China, All Nippon Airways, China Eastern Airlines and Taiwan’s China Airlines. SIA has not announced plans to follow suit, but it has never explicitly ruled out the possibility.

“We are aware of the higher density economy class products in the market today, and will continue to monitor developments, as well as bear in mind feedback from our customers with respect to seat density,” it says.