ANALYSIS: Why Airbus Helicopters is on an Even keel

After a little under a year in the job, Bruno Even, chief executive of Airbus Helicopters, seems to be settling into the role.

Even is gearing up for his first appearance at HAI Heli-Expo in his new position and says he is "happy and excited to be there".

Of course, his good mood has been helped by a relatively robust performance from Airbus Helicopters over the past 12 months and a market that no longer appears to be in crisis.

Although Even does not forecast a major recovery in the civil segment until at least 2020, he says the market is now at a "stabilised low point".

In 2018, the manufacturer delivered 356 helicopters and took in 381 net orders, including a number of sizeable military deals; revenue was €5.9 billion ($6.7 billion). And while the new helicopter sales were strong, Even also notes the "repurposing" of former offshore transport-roled H225s to "new applications". Around 50 Super Pumas have undergone this process so far.

But the continued market softness has driven a behavioural change at the manufacturer: rather than spending precious resources on developing an all-new helicopter that cash-conscious operators may not want, it is instead focused on delivering upgrades to its existing range.

A pair of such initiatives – one major, one minor – will be unveiled at HAI.

Even says the company's priorities centre on "customer loyalty and innovation". The former is about becoming closer to its clients and "better understanding their requirements", while the latter has to deliver value, rather than being "technology for technology's sake".

For Tomasz Krysinski, head of innovation, speaking at the manufacturer's Marignane site in the south of France, that edict translates to a short-term goal of developing "advanced technologies for the legacy fleet". 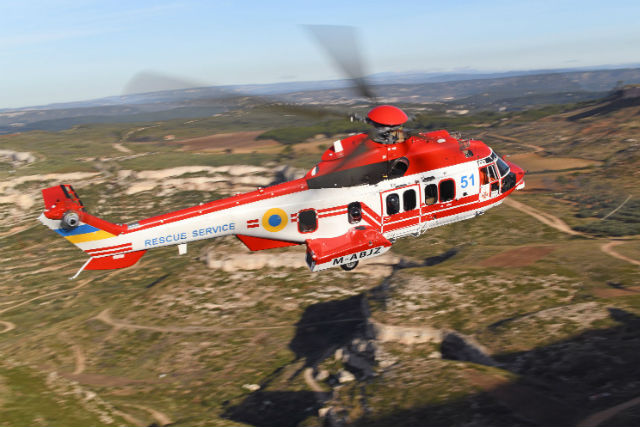 Examples of this include the ongoing work on its Eye for Autonomous Guidance in Landing Extension system, or EAGLE for short.

As the tortured acronym might suggest, it is a tool to help pilots land in difficult conditions. EAGLE combines three high-resolution cameras in a nose-mounted pod. Images from this are fed through a high-speed processor, with the output delivered directly into the helicopter's digital autopilot, allowing a fully automated approach.

Flight tests using a H225 heavy-twin testbed will begin shortly, says Krysinski, although it is also working on a simpler "more affordable" system for lighter helicopters.

Depending on the outcome of testing, EAGLE could be deployed within two to three years, he says.

Another simple safety boost could be delivered by what Krysinski calls an "electric back-up system" – the addition of a battery and electric motor that can provide emergency power in the event of an engine failure, allowing a "much smoother autorotation".

A first version of the system using a 100kW battery was tested in 2012, but limitations with the technology prevented further progress.

Since then, batteries have become more capable, and trials of a system with a higher technology readiness level will be conducted next year using an H130 light-single, followed by evaluations of a 240kW model for a larger helicopter six to eight months later.

Although there is a small weight penalty from the addition of the battery and motor, the overall benefit from the increased power available in relation to certification requirements could allow an extra passenger to be carried, says Krysinski.

But as with any manufacturer, research and innovation does not stop with short-term technology insertion projects. 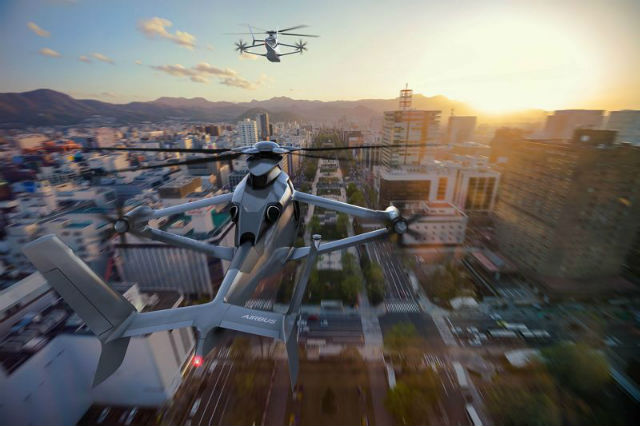 Airbus Helicopters is developing its Racer (another acronym, this time standing for Rapid and Cost-Effective Rotorcraft) high-speed technology demonstrator as part of an EU-funded project.

This compound twin-engined helicopter, which features two rear-facing pusher props and a distinctive V-wing configuration, will fly at the end of next year.

A key efficiency gain comes from an ability to shut down one powerplant while in cruise at 180kt (333km/h), cutting fuel consumption significantly, even against both turboshafts working at 50% power.

Although it is not a hybrid powertrain, the requirement for a rapid restart of the idled engine has been enabled by a high-voltage electrical system. "This is a really big advantage," says Krysinski.

But for tangible glimpse of what the airframer thinks the future might look like, you need to make the short hop over the Alps to its Donauworth plant in southern Germany.

Here in a quiet corner of the sprawling factory complex is its Systemhaus development centre, and there, behind an anonymous roller-door, is the first prototype of its CityAirbus project.

The vehicle was due to fly late last year, but the manufacturer now believes the milestone will come within weeks.

Once airborne, flight tests will continue through 2019, initially controlled by a pilot on the ground, before transitioning to autonomous missions.

With its muscular, hunched-over shape and carbonfibre construction, the aircraft looks futuristic, and the technologies used – electrical power, autonomy – are a collection of current industry buzzwords.

But for all that, Airbus Helicopters has opted – at least for the moment – to use a more traditional material for at least one element of the design: those eight propellers are all made of wood.