An Airbus flight-test campaign to prove its solar-powered, stratosphere-cruising Zephyr aircraft and payloads it will carry for the UK Ministry of Defence (MoD) got off to an inauspicious start last month, when a bout of "severe adverse weather" caused the delicate aircraft – with a 25m (82ft) wingspan but a mass of less than 75kg (170lb) – to crash near its launch site in Wyndham, Western Australia. 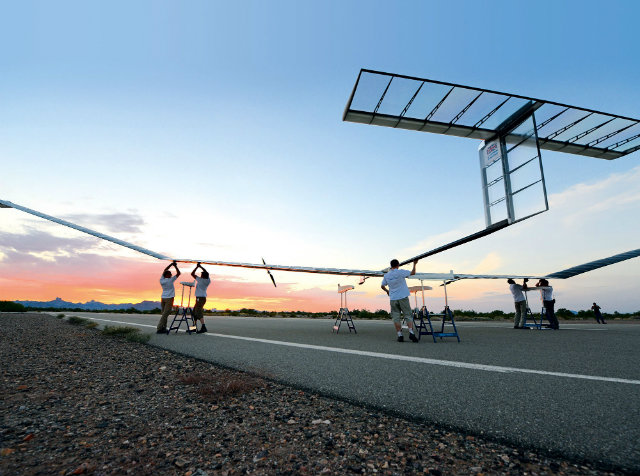 Airbus says the 15 March crash happened "in an extremely remote location" and caused no injuries or property damage. The company cannot elaborate on the condition of the MoD-owned aircraft, nor say whether it is repairable, but the incident, about 4h into an "experimental demonstration flight", brought to an end one phase of an "operational concept demonstration" for the customer.

The Australia campaign – begun earlier this year and following a 2018 test series in Yuma, Arizona, which saw Zephyr set the world record for aerial endurance at just short of 26 days – will continue "as soon as possible".

Airbus and the MoD are carrying out a non-statutory inquiry and expect to make an initial report to the UK's Defence Accident Investigation Branch. For now, Airbus says that while the aircraft is relatively safe from the weather at its normal operating level of around 65,000ft, the March incident points to the need to take extra care with forecasts covering the take-off and climb phase.

The MoD is understood to have purchased three Zephyrs, which are being built at a factory in Farnborough, Hampshire, that has been operating since the air show in 2018.

Programme head Sophie Thomas tells FlightGlobal that the first Farnborough-built aircraft is on its way to Wyndham now. And, she adds, Airbus has secured a second, as-yet unnamed, customer for what is the world's first operational aircraft of a type known as a "high-altitude pseudo-satellite" (HAPS). Zephyr, she says, has managed a maximum altitude in excess of 74,000ft.

The important altitude figure, though, is 60,000ft – which Zephyr has consistently exceeded at dawn, when a solar-powered aircraft will be at its lowest because it will have had to fly through the night on battery power. That height, says Thomas, ensures Zephyr remains in the stratosphere throughout a mission. From the aircraft perspective, the next couple of years of testing will therefore focus on increasing endurance by pushing to "expand significantly" the power envelope to boost payload capacity.

Thomas says she remains optimistic about achieving a previously cited target of operating for 100 day-night cycles before having to land for new batteries.

As the name HAPS implies, these machines are designed to fly very high with very long endurance. But unlike actual satellites, they can be positioned flexibly and quickly to provide what Thomas sums up as three key functions: "see, sense and connect".

She stresses that in all three functions, HAPS should be seen as complementary to satellites and part of a "layered" infrastructure. In its "see" mode, says Thomas, Zephyr can complement satellite observation by carrying a "very high-resolution" imaging payload for either institutional or commercial customers; where satellites are put in orbit and then inaccessible, HAPS can be deployed flexibly. And HAPS does not commit a customer to a long mission duration, as satellites do.

Payloads designed to "sense" other phenomena will likely appeal to institutional customers, a category typically thought to consist of militaries, government or scientific agencies.

Thomas is clearly animated by the "connect" function, which would see Zephyr carry telecommunication payloads. Here, she foresees "exponential demand" for a vehicle that can be deployed rapidly to any location where communications infrastructure is inadequate or damaged by, say, a natural disaster.

Indeed, Thomas envisions "a large constellation" – a term typically used for fleets of satellites – of "hundreds to thousands" of Zephyrs that can be cycled in and out of service to maintain coverage as needed. The aircraft can travel around 540nm (1,000km) per day, facilitating redeployment during a mission.

That notion of "hundreds to thousands" may not be over-ambitious. Consider the example of OneWeb, the UK-based telecommunications start-up determined to "bring connectivity to everyone, everywhere".

In February, a successful launch orbited the first six of some 650 Airbus-built satellites through which OneWeb intends to supply 5G, internet of things and other connectivity services, especially to equatorial regions ill-served by existing infrastructure. That proof-of-concept launch will be followed by the "largest satellite launch campaign in history", to commence later this year and orbit 30 units at a time, principally via Soyuz launches from Europe's spaceport in French Guiana.

OneWeb expects to achieve global commercial coverage from 2021. But it will not be alone for long; SpaceX is one of several companies lining up to orbit several thousand satellites to sell connectivity services. Critically, all of these schemes will at various times need to fill gaps in their coverage, owing to satellite failure, launch delay or geography – ideal missions for flexible HAPS.

Airbus may be the most advanced, but it is not alone in the HAPS game. BAE Systems is working with Farnborough-based unmanned air vehicle and satellite designer Prismatic on a solar-electric concept called PHASA-35 that aims to achieve one-year endurance, and Boeing subsidiary Aurora Flight Sciences is targeting spring 2019 for the maiden flight of its version, called Odysseus.

Other projects come from AeroVironment and Japanese telecoms operator SoftBank, as well as from Astigan, led by the UK's Ordnance Survey mapping company. Taking a different approach, Thales is developing an autonomous airship called Stratobus.

Meanwhile, Thomas says the Zephyr programme's short-term objective is to supply services with four or five aircraft from 2020. The aircraft, she stresses, is designed for "incremental improvement" to its power, payload and endurance capabilities.

The next big item on the development agenda is to field a mechanical launcher, which should begin trials in 2020. For now, Zephyr is hand-launched, an operating mode that means more ground handling than might be ideal for such a fragile machine. A "more benign" launch regime, says Thomas, should translate into greater battery and payload capacity.