Mitsubishi Aircraft is assembling what it describes as an industry-leading customer service team to support the coming entry into service of the company’s SpaceJet M90.

Exactly when launch customer All Nippon Airways (ANA) will begin flying the aircraft remains uncertain, but the airframer insists its support team will be ready.

That team will use advanced technology, be tightly integrated with the broader company and staffed by employees with significant aviation industry experience, say the two executives leading the effort.

“We are not trying to be another Bombardier or Embraer,” Mitsubishi Aircraft director of service readiness and integration Nicola McCarron tells FlightGlobal.

“We are trying to create something new and set a new standard in the world,” she adds. “We know what works well, and we know what would work even better.”

“We are building a global team,” says Jabour, adding that each airline customer will be assigned a specific point of contact on that team. “The airline is going to be married to us.” 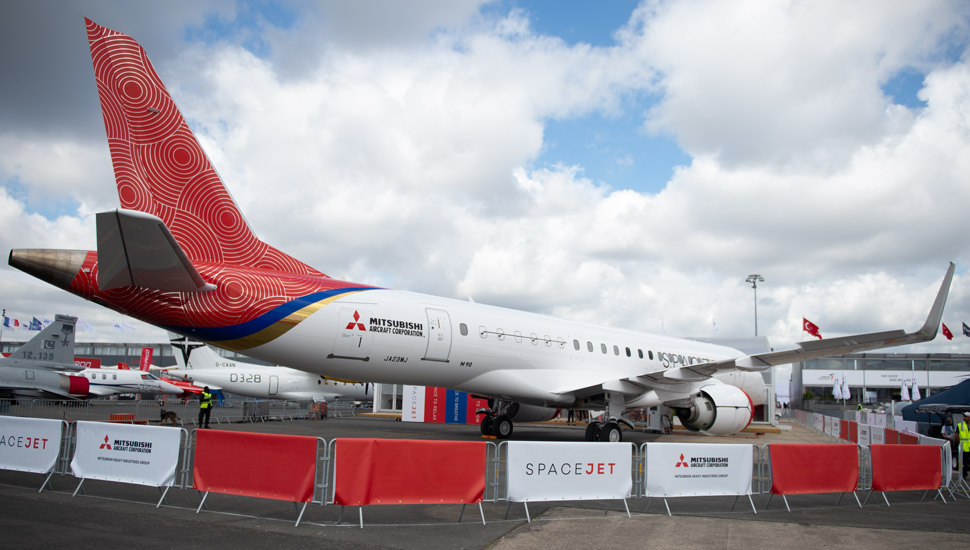 Mitsubishi Aircraft displayed its SpaceJet M90, a re-brand of the MRJ90, at the Paris air show in June

They are setting up customer support as Mitsubishi Aircraft pursues certification of its 88-seat, Pratt & Whitney PW1200G-powered SpaceJet M90, the aircraft known as the MRJ90 prior to a re-branding at the Paris air show in June. The company maintains it is on track to deliver the first aircraft to launch customer ANA in 2020.

Mitsubishi Aircraft is also developing the SpaceJet M100, a variant unveiled prior to the air show that, with 76 seats, fits nicely the requirements of many US regional airlines.

Mitsubishi Aircraft says it intends to begin M100 deliveries in 2024, and days ago it secured a commitment from US regional Mesa Airlines to acquire at least 50 of the type.

Though CRJ production will cease, the acquisition will bring under Mitsubishi’s wing the CRJ’s global support business, which industry analysts describe as an invaluable asset for a newcomer trying to land orders.

Jabour and McCarron decline to discuss the CRJ deal or its potential aftermarket implications. Bombardier expects the sale will close in the first half of 2020.

Mitsubishi Aircraft has already assembled a 130-employee-strong customer support division. Most of those staffers work from Nagoya, though the company has teams at its US headquarters in Renton, Washington and its flight-test center in Moses Lake, Washington, says Jabour.

He acknowledges Mitsubishi Aircraft previously had gaps in the skills it needed, but says his team gone to work filling those gaps.

They are scouring the globe for employees with aerospace customer service experience, and Jabour expects the headcount will hit about 200 when the first M90 enters service. It will have field service representatives with airlines and a “go team” that can be dispatched to address issues.

“We are carefully identifying the skill sets we need,” says McCarron. “Each candidate goes through a careful interview process, and we are making sure [that], when we make a decision, we have searched the world for… the very best candidate.”

Mitsubishi already has a bit of a reputation for poaching competitors’ staff – not an unusual practice in a specialised industry dominated by a relative few players.

Mitsubishi and the employees denied the allegations, and the court halted the proceedings shortly after MHI agreed to purchase the CRJ programme.

McCarron aims to ensure her team never becomes “siloed” – meaning to operate independent and removed from the rest of the company. Such a structure, she says, stifles communications and effectiveness.

Rather, Mitsubishi Aircraft’s customer service team and the technology it uses will be tightly integrated with other company divisions, such as engineering, design, supply chain and manufacturing, executives say.

That structure will ensure information flows seamlessly between departments.

The customer service team will make use of advanced technology like SpaceJet’s aircraft health management system – technology that collects data from a range of aircraft systems. That data can help flag potential maintenance issues before they cause operational disruptions.

Mitsubishi Aircraft does not specify details about the M90’s health monitoring system, such as the number of data parameters. But Jabour insists the system will be more advanced than systems on aircraft like the Airbus A220 or Embraer E-Jets E2.

M90 customer JAL already has engineers working to aircraft health management, but it views the SpaceJet’s data system as a means to reduce man-hours, Jabour says.

Her unit will make use of advanced inventory control and maintenance and fleet planning systems. Such technology will be capable of linking with various other units, like parts warehouses, airline operations centers and shipping companies like DHL or FedEx, she says.

“Digital strategy is what makes you [stand] apart from the competition,” McCarron says.

The team is already working closely with launch customer ANA, and with JAL. Mitsubishi Aircraft aims for the M90 to achieve initial dispatch reliability of 99.5%, though it says ANA’s target is even higher.

“The Japanese airlines are the most demanding,” says McCarron. “They take great pride in their dispatch reliability.”