The first production version of the AIDC T-5 Brave Eagle advanced jet trainer made its flight debut on 21 October, according to Taiwanese state media.

The sortie took place from Taichung’s Ching Chuan Kang air base, with the aircraft accompanied by a T-5 prototype, according to Taiwan’s Central News Agency (CNA). 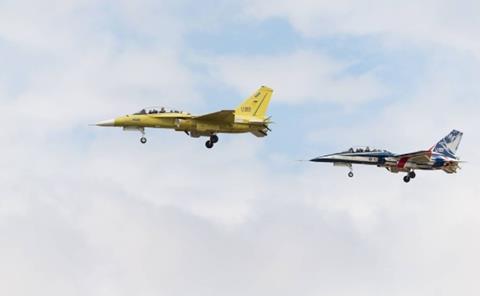 The flight came 16 months after the first flight of a T-5 prototype aircraft on 10 June 2020. Two T-5 prototypes were involved in flight tests – the second reportedly had its maiden flight in December 2020 – before AIDC commenced production of the type, which is to replace AIDC AT-3 advanced trainer and Northrop F-5E/F lead-in fighter.

A joint programme between state-owned National Chung-Shan Institute of Science and Technology, the Republic of China Air Force, and AIDC, the T-5 is based on the twin-seat version of the F-CK-1 Indigenous Defence Fighter, but 80% of its components are new.

Key changes include greater use of composites, more fuel capacity, a wing optimised for slower, more stable low-level flight, and the removal of the fighter’s gun.

According to CNA, citing a defence ministry report to the legislature, Taiwan’s military will obtain 66 examples, which are to be delivered by 2026.