L3Harris has secured a $496 million engineering and manufacturing development (EMD) contract for further work on the Next Generation Jammer Low Band (NGJ-LB) project for the US Navy (USN).

The contract, awarded on 18 December, calls for the company to complete the design and manufacture eight operational prototype pods and four test pods for airworthiness and functionality evaluation aboard the Boeing EA-18G Growler electronic warfare aircraft. 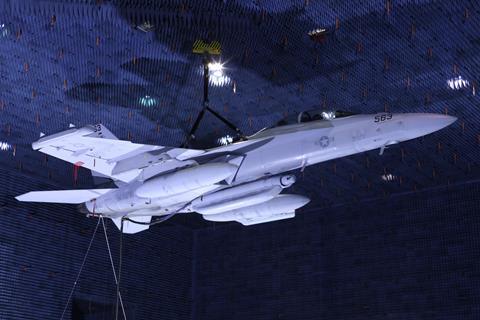 “NGJ-LB is the next step in the evolution of airborne electronic attack that is needed to meet current and emerging electronic warfare gaps,” says Rear Admiral Shane Gahagan, programme executive officer, tactical aircraft programmes for the USN.

“The increased jamming capability that NGJ-LB brings to the warfighter is critical to sustaining the future missions of the navy and other services.”

The L3Harris contract follows the USN’s 8 December decision to move the NGJ-LB project to the EMD phase. Prior to this, the service had tested hardware from both L3Harris and Northrop Grumman.

An NGJ-LB pod is carried under the EA-18G’s centreline or wing. It is intended to disrupt, deny, degrade and deceive enemy air defences, such as radar-guided surface-to-air missiles, and ground-based communication systems that operate on lower radio frequencies, says the USN.

Lower frequency radars have been shown to be more capable of detecting stealth aircraft, such as the Lockheed Martin F-35. Jamming those radars is necessary so that stealth aircraft can cross into enemy airspace and prosecute their mission.

The low-band jamming pod is a partial replacement for the ALQ-99 Tactical Jamming System that is currently used on the EA-18G electronic attack aircraft operated by the USN and Royal Australian Air Force.

The USN will develop and deploy two other jammers: a mid-band jammer and a high-band jammer. Raytheon won an earlier competition to develop the ALQ-249 Next Generation Jammer Mid-Band. The high-band jammer will be developed later.