Saab has shipped its second aft section for the test programme of the Boeing T-7A advanced jet trainer.

The shipment is en route to Boeing’s St. Louis production site after being shipped from Linkoping, Sweden on 24 July, says Saab. Saab considers the article delivered when it leaves its factory. 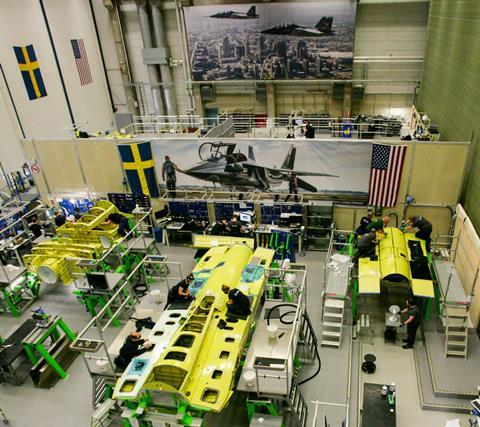 Following the completion of the T-7A’s engineering and manufacturing development phase, a new Saab facility in West Lafayette, Indiana will produce the trainer’s aft section.

“Together with Boeing, we are achieving our ambitious vision: to redefine what a trainer jet is, and to do so through digital engineering. This represents yet another milestone in delivering on our commitments.”

The aft section will be mated with the jet’s front section, wings, fins, and tail assembly. Saab says the aft section and its installed subsystems is the centre structure of the T-7A from behind the cockpit to the tail.

The first aft airframe was delivered in April 2021, and was joined with the front fuselage in less than 30 minutes, says Saab. The company attributed this to the accuracy of the digital design and engineering that was used to create the T-7A.

Separately, Boeing referred to efficiency of the T-7A’s design process in its newly-released sustainability report. It claims that design and production improvements boosted first-time engineering quality by 75%, and reduced production hours by 80%.

Boeing projects that T-7A production will last over the next couple of decades. The company has a $9.2 billion contract with the USAF to supply 351 advanced trainers and 46 ground-based training simulators.

The company believes there is a global market for 2,600 T-7s, both as trainers and light-attack or aggressor aircraft.

Article updated on 27 July to note that Saab considers an article delivered when it leaves its factory, not when it is received by the customer.