Sikorsky has unveiled its design pitch for the US Army’s Future Armed Reconnaissance Aircraft (FARA) requirement.

Sikorsky has unveiled its design pitch for the US Army’s Future Armed Reconnaissance Aircraft (FARA) requirement.

The co-axial rotorcraft is 20% larger than the S-97 Raider predecessor on which it is based – partly to accommodate the US Army’s engine of choice, GE Aviation’s T901-900 turboshaft, the company says. It revealed its candidate at the Association of the United States Army’s 2019 exposition in Washington DC on 14 October.

The T901 won the service’s Improved Turbine Engine Programme competition in February 2019 and is intended for Future Vertical Lift aircraft such as FARA and a Future Long-Range Assault Aircraft. It is also intended to replace engines in current US Army Boeing AH-64 Apache attack and Sikorsky UH-60 utility helicopters. 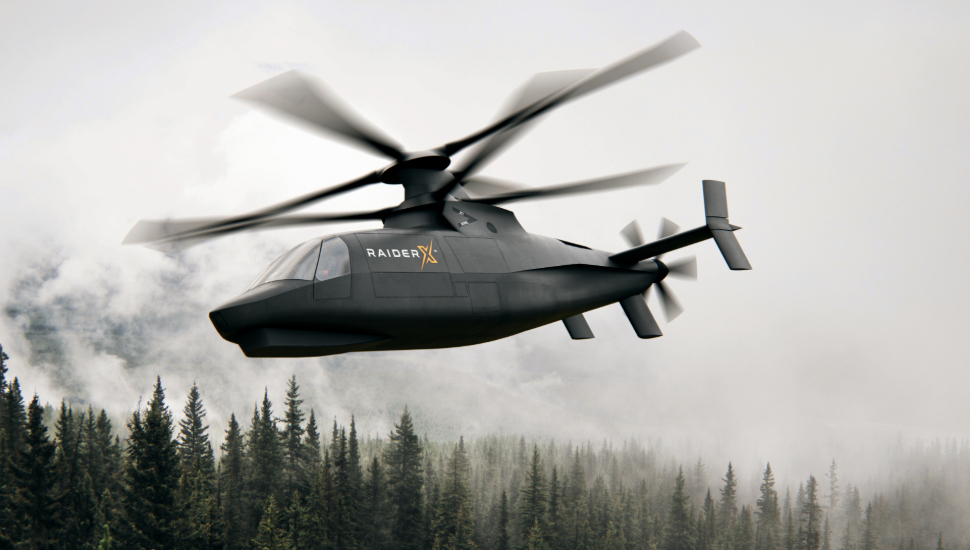 Sikorsky is touting the Raider X’s similarities to its S-97 and earlier X2 demonstrator – compound helicopters that have been flying for years – as an important advantage over its competitors, which are early in the design phase and do not have flying rotorcraft. Years of flight testing means the kinks have been worked out of Sikorsky’s rigid co-axial, compound helicopter technology, reducing the risk that future production examples could go over budget or run into performance problems, the company says.

Sikorsky declines to disclose the Raider X’s expected top speed, but says it is designed to meet and exceed the army’s requirement of 180kt (333km/h). It notes that its other demonstrator aircraft have achieved far beyond that speed. “[The] S-97 has done 215kt in a dive,” the company says. “We expect [the Sikorsky-Boeing SB-1] Defiant to exceed 250kt – and the original X2 demonstrator exceeded 250kt.”

The Raider X should also become faster as the T901 engine becomes more powerful with future enhancements, the company says.

“With X2 [technology], you've always got an advancing blade on both sides,” says Tim Malia, Sikorsky’s director of Future Vertical Lift Light. “So as the T901 engine has a power growth curve over time, we'll be able to directly harness that with our existing aircraft. Upgrade the engine – you just got more speed, you just got more payload.”

The Raider X’s larger size also means more volume for an internal weapons bay, between 2.8cbm (100cb ft) to 3.4cbm, which is more than the 0.85cbm the US Army asked for, says Malia. “If you look at the Raider X offering, you'll see it's a side-by-side cockpit. We were able to do that because we chose to go to a wider fuselage,” he says. “We wanted to maximize the amount of volume that was available in the aircraft for future weapons.”

Sikorsky believes a larger weapons bay will be particularly important to the US Army in the decades ahead, especially if FARA is expected to carry and deploy so-called air-launched effects (ALE): unmanned air vehicles (UAVs) that are carried aboard rotorcraft and flown as companion aircraft in a variety of roles.

The company says it decided not to go with a tandem cockpit configuration, like the AH-64 or Bell’s 360 Invictus FARA offering, because it would use up space for internal payloads. However, Sikorsky says a side-by-side cockpit comes with trade-offs, as a tandem cockpit could have made the Raider X slightly lighter and cheaper.

Sikorsky believes a larger internal payload could also allow the Raider X to easily be converted or reconfigured into a utility rotorcraft.

“You could take the weapon launchers off, and the volume that we now have inside, it looks like a six-man cabin. So if in the future, the army or one of the other services wanted to have a multi-role and multi-mission kind of capability, it just so happens this helicopter is ready to do that job too.”