The US Air Force has demonstrated the ability to update the software for a fighter’s electronic warfare (EW) system during flight. 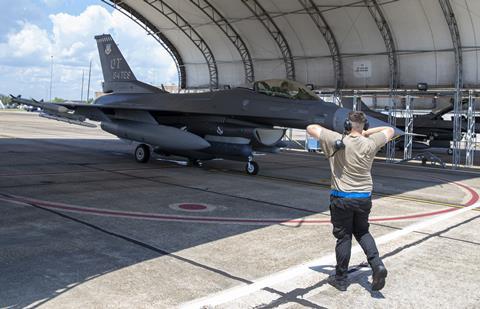 The F-16C involved in the in-flight software update work

Once the MDF was received, the jet’s Center Display Unit Software loaded the new data onto its ALQ-213 countermeasures signals processor.

“We believe this is the first time a fighter aircraft has received a software update and gained new capability all while in flight,” says Lieutenant Colonel Zachary Probst, a flight test pilot and commander of the 84th Test and Evaluation Squadron.

“This is a big deal. There’s a tactical need to be able to rapidly update software, especially mission data files because that’s what ties into our ability to identify, find, and defend ourselves against enemy threat systems.”

The USAF adds that the idea of real-time software updates for airborne F-16s could be rolled out across the broader fleet at some point. The next phase of the work involves integrating high-speed internet on the F-16, which will allow pilots to access data from a classified cloud.

The in-flight software update project was conducted under the auspices of the USAF’s Advanced Battle Management System (ABMS) project. ABMS is a sort of military internet network being developed to link a vast array of aircraft, equipment and soldiers.