The US Air Force Research Laboratory’s first demonstration of its Golden Horde collaborative bomb partly failed due to a software problem.

The Golden Horde effort is one of the US Air Force’s (USAF’s) top Science and Technology development priorities, a so-called Vanguard programme. 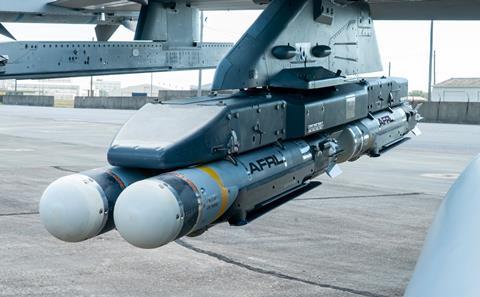 In a demonstration on 15 December, at Eglin AFB in Florida, a Lockheed Martin F-16 fighter dropped “Collaborative Small Diameter Bombs” over targets. The first part of the demonstration was deemed successful by the USAF as the weapons connected to each other and detected a GPS jamming device on the ground using their target seekers.

“During the mission, the weapons referred to pre-defined Rules of Engagement, a set of constraints preloaded by a mission planner, and determined that the jammer was not the highest priority target,” says the USAF. “The weapons then collaborated to identify the two highest priority targets. However, due to an improper weapon software load, the collaboration guidance commands were not sent to the weapon navigation system. Without the updated target locations, the weapons impacted a fail-safe target location.”

The USAF says it intends to make this new class of smart bombs “networked, collaborative and autonomous”. The Small Diameter Bomb upon which the weapon is based has pop-out wings that allow it to glide more than 40nm (75km) to a target. During that journey the collaborative bomb is supposed to look around, share information with other collaborative bombs and then decide if better targets are available for striking.

The “weapons observe and react to a dynamic battlespace in real time, thereby increasing mission effectiveness within the enemy’s decision loop,” says the USAF. “When deployed in mass, [the] weapons effectively share information and collaborate to overwhelm adversary defences.”

The Collaborative Small Diameter Bomb is based on the GBU-39B Small Diameter Bomb, modified with hardware and software that gives the weapons the ability to collaborate as they fall toward their target. Modifications include a home-on-GPS-jam seeker, a software defined radio for communication between weapons and a processor preloaded with “collaborative” algorithms.

“The collaborative algorithms use a dynamic approach called play calling, similar to a quarterback calling a play in football,” says the USAF. “A ‘play’ is an established behaviour that groups of collaborative weapons, or swarms, can enable (or disable) when they meet certain pre-defined conditions.”

Because the weapons are following pre-defined Rules of Engagement and an approved list of plays, the service considers the bombs to only be “semi-autonomous”.

Despite the hiccup in the first test, the USAF was encouraged with the initial demonstration.

“I’m very pleased with results of this first test,” says Steven Stockbridge, Golden Horde principal investigator. “The team saw good performance from the networked collaborative sub-systems and understand the root cause of the weapons not impacting the desired targets. We anticipate readiness for the next flight test.”

The USAF plans two additional Collaborative Small Diameter Bomb test flights in early 2021. In those tests the service plans to increase the number of collaborative bombs to four.