US Air Force looks at ‘cognitive electronic warfare’ for F-15

In particular, the service is looking for artificial intelligence and machine learning “algorithms to advance the capabilities of airborne electronic warfare systems in development and production” for the F-15, it says in a sources sought notice posted online on 11 March. 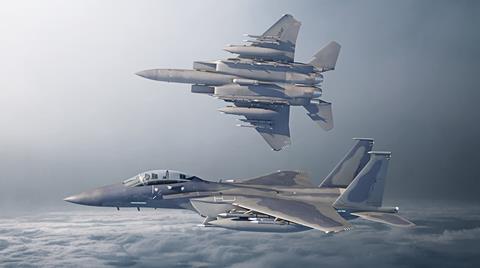 BAE Systems provides the electronic warfare and countermeasures system, the Passive Active Warning and Survivability System (EPAWSS), for the F-15, including the latest “EX” variant.

Aircraft currently rely on a database of known electronic emissions from adversaries to identify and then counter threats. For example, identifying a surface-to-air missile battery’s radar frequency and then using already-developed electronic warfare tactics to jam or interfere with it.

However, as adversaries’ radar systems become more sophisticated they are able to track US aircraft with novel signals that are not in the US library of electronic emissions. Gathering information on these new signals and then developing countermeasures takes time, leaving aircraft vulnerable in the meanwhile.

Cognitive electronic warfare aims to use artificial intelligence and machine learning to quickly and automatically identify new signals. In the future, an aircraft’s onboard computer might even be able to rapidly come up with a countermeasure.

The extent to which the USAF wants to automate the collection of electronic intelligence and countermeasures is not detailed. However, the service says it wants “algorithms and technologies that provide the capability for [electronic warfare] systems to more rapidly and intelligently respond to emitter ambiguities, emerging threats, in both sparse and dense signal environments”.

“Cognitive electronic support and electronic attack technologies will investigate and resolve challenges of adaptive, agile, ambiguous, and out-of-library complex emitters that coexist with background (signals that are not the primary signal of interest) signal challenges,” says the USAF notice. “The government is also interested in cognitive technologies which provide rapid [electronic warfare] reprogramming capability or leverage the interplay and accumulation of knowledge for improved system performance.”