The USN launched the missile from a Boeing F/A-18F Super Hornet fighter within the Point Mugu Sea Range off the coast of southern California. After flying an “extended range profile” the weapon successfully hit a radar on San Nicholas Island, the missile’s manufacturer, Northrop Grumman, said on 7 February. 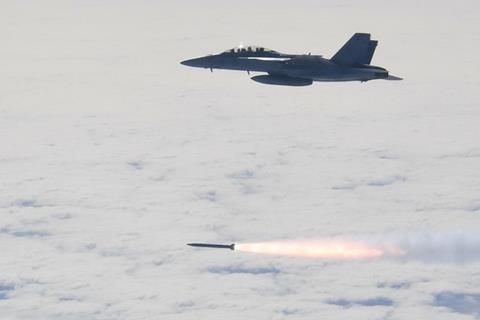 Last September, the USN said it had made a Milestone C decision for the AARGM-ER, authorising low-rate initial production of the weapon. Northrop is currently under contract to deliver initial production units of AARGM-ER for a 2023 initial operational capability fielding. The company received a $45.6 million contract for the second production lot of the missiles in December.

The USN test launched the AGM-88G from a Super Hornet for the first time last July.

AARGM-ER is based on AARGM, which is in full-rate production and in service.

The -ER variant shares components with the original AARGM but includes a new warhead for increased destruction and a new rocket motor for a greater range. The original had four fins arrayed around its mid-body, but the extended range variant has a strake along its length to increase lift.

Many of the capabilities of AARGM-ER – such as its range – are not disclosed. Anti-radiation missiles are critical for the opening phases of an air war; thus the weapons’ performance is typically classified.

The AGM-88G is designed to destroy enemy radar, jammers and radio transmitters during an initial phase of war called the suppression of enemy air defences, or SEAD. The missile is intended to blind an adversary and cut off its ability to communicate.

The USN plans to integrate the missile with the F/A-18E/F and EA-18G Growler, the electronic warfare version of the Super Hornet. All three variants of Lockheed Martin’s F-35 stealth fighter – operated by the USN, US Marine Corps and US Air Force – will also be capable of carrying AARGM-ERs.