Airbus has delivered the first aircraft powered by a renewable jet fuel blend from its US facilities in Mobile, with a A321 handed over to JetBlue Airways today.

The aircraft conducted an acceptance flight and will operate its ferry flight tomorrow from Mobile with a fuel blend of 15.5% renewable fuel mixed with traditional jet fuel. 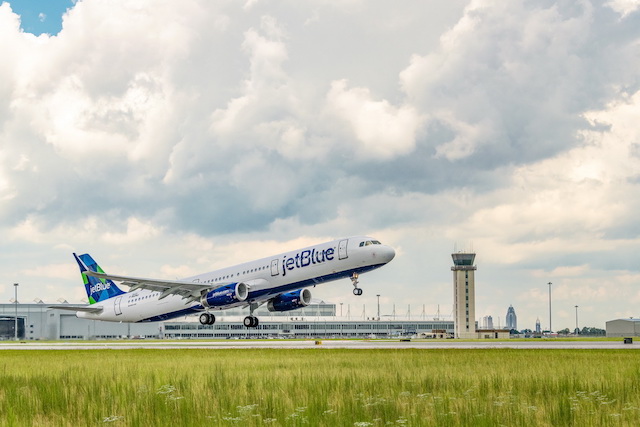 The flights mark the first renewable jet fuel flights for the New York-based carrier, which will take delivery of four more A321s from Mobile by end-2018. All of the acceptance and delivery flights will be powered by renewable jet fuel, says JetBlue.

"Our goal is to serve as a market-maker for renewable jet fuel, creating demand and therefore supporting supply. We're working closely with Airbus to set up infrastructure for more options in the southeast region," says JetBlue chief executive Robin Hayes.

Since May 2016, Airbus has offered customers the option of taking delivery of new aircraft from its Toulouse facilities using sustainable fuel blends. The airframer says it will "determine the next steps toward offering this option to more customers taking aircraft deliveries from Mobile".

"Our goal is to source sustainable fuels in the southeastern United States. It is an opportunity to work closely with local stakeholders to scale up production and the commercialisation of sustainable aviation fuels in the region," says Frederic Eychenne, head of new energies at Airbus.

Airbus says the sustainable fuel used for the delivery flights will be supplied and certified by Air BP. It will be loaded into aircraft by Signature Flight Support.

In 2016, JetBlue signed a 10-year deal with bioenergy firm SG Preston to purchase renewable jet fuel at New York John F Kennedy airport, committing to buy more than 125 million litres (33 million gallons) of blended jet fuel annually for at least a decade. The airline said previously it would take first delivery of the fuel in 2019.

The amount JetBlue plans to purchase will make up about 20% of its annual fuel consumption at JFK, the airline has said.