Norway’s first two AgustaWestland AW101s have been rolled out at the Leonardo-Finmeccanica company’s Yeovil assembly site in the UK, with the search and rescue (SAR) assets part of an at-least 16-unit production order for Oslo.

Being acquired via the Norwegian all-weather SAR helicopter (NAWSARH) programme, the heavy-lift rotorcraft will be used to replace an aged fleet of Westland Sea King 43s, which have been operated by the nation’s air force since 1973. Norway’s defence ministry – which also has an option to acquire a further six of the type – values the total acquisition at around DKr14 billion ($1.68 billion). 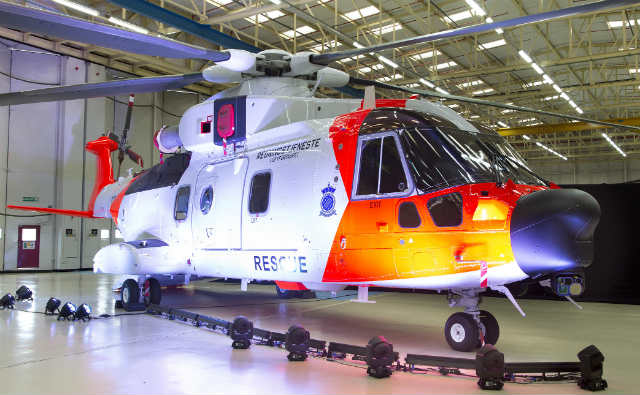 A first aircraft will be delivered to the Royal Norwegian Air Force in March 2017, with the defence ministry expecting this to be involved in a one-year programme of operational test and evaluation. The service’s remaining rotorcraft are scheduled to be transferred by 2020, with Leonardo Helicopters to also provide a 15-year package of training, in-service support and spare parts under its December 2013 contract.

Key mission equipment installed in the Norwegian AW101 configuration includes the first application for Leonardo’s Osprey active electronically scanned array radar. A trio of flat-panel sensors are fitted – in the aircraft’s nose and at the rear of each main landing gear sponson – to provide 360˚ surveillance capability. This equipment was fitted ahead of the first flight of an NAWSARH aircraft, which took place from Yeovil on 21 March.