India’s navy has taken delivery of two Sikorsky MH-60R naval multi-role helicopters in India, the first examples to arrive in the subcontinent.

The two helicopters arrived on 28 July, according to the navy. A third helicopter is set to arrive this month. 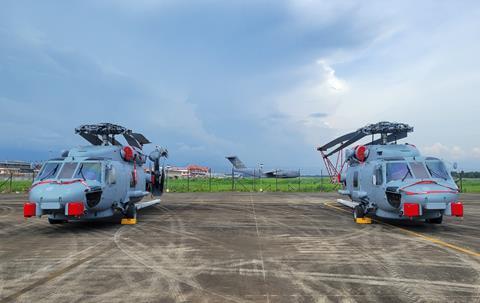 In 2020, New Delhi signed a letter of offer and acceptance for 24 MH-60Rs to be obtained through the US government’s Foreign Military Sales Process. The Indian navy says the acquisition is valued in excess of INR140 billion ($1.8 billion), with all rotorcraft to be delivered by 2025.

“The induction of state of the art mission capable platforms will significantly boost the integral [anti-submarine warfare] capability of the Indian Navy,” says the navy.

Images posted by the navy suggest that the two helicopters were transported to Kochi by a Boeing C-17 strategic transport operated by the US Air Force.