Announced on 16 January and also covering demonstration activities, the deal will deliver an updated organic airborne early warning capability for use from the RN’s future pair of Queen Elizabeth-class aircraft carriers.

The RN’s entire 30-strong fleet of Merlin HM2s will be modified by Leonardo Helicopters to enable them to carry an evolution of the Thales-developed Searchwater radar and Cerberus mission system: a combination in current service with its aged Westland Sea King ASaC 7 rotorcraft. Thales will supply 10 such systems, which it says will “maximise the re-use of the Ministry of Defence’s existing investment in equipment, training and expertise”. 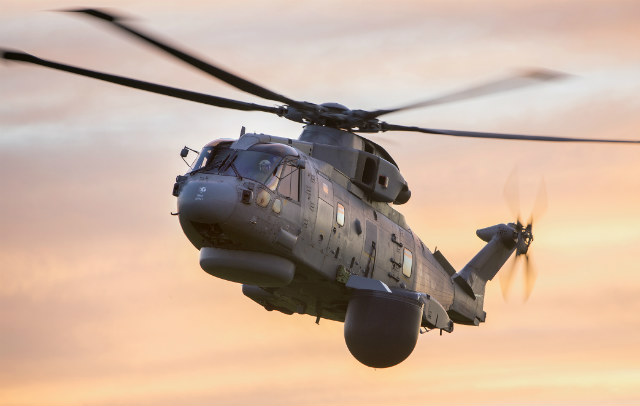 New elements to be introduced with the Crowsnest update include an inverse synthetic aperture radar mode, electronic support measures equipment and what Thales describes as an “autonomous artificial intelligence-based tracking system”. Once combined with touch-screen displays for the Merlin’s onboard operators, these will provide “vastly improved target identification [and] the ability to library-match airborne contacts,” the company adds.

Introduction of the Crowsnest capability will occur in sequence with the RN’s retirement of the Sea King ASaC 7 fleet from 2018. Thales says the Merlin-based system – to be home-based at RNAS Culdrose in Cornwall – is expected to remain in operational use until 2029.

The Searchwater/Cerberus upgrade option was selected in March 2015, with a Lockheed Martin UK-led assessment phase having concluded last year. The MoD says its contract award also includes an initial £9 million to provide spare parts for use during the programme’s training and operational deployment phases.