The US Naval Research Laboratory flew a Hybrid Tiger unmanned air vehicle (UAV) for more than 24h in November 2020, its longest flight demonstrated.

The electric UAV was powered by a hydrogen fuel cell and solar panels on its wings, as well as using energy harvesting techniques, such as soaring on thermal updrafts, the laboratory said on 14 April. The demonstration took place at Aberdeen Proving Grounds in Maryland. 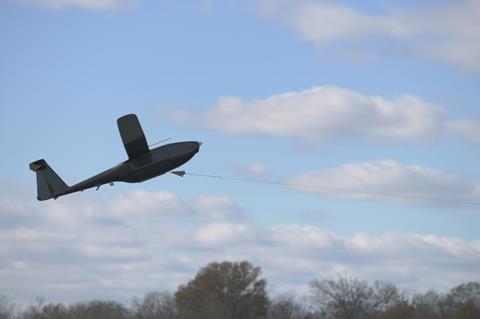 Hybrid Tiger being launched with a winch system

“The flight was effectively a performance test in worst-case conditions: temperatures falling below zero degrees Celsius, winds gusting to 20kt [37km/h], and relatively little solar energy as we approached the solar solstice [on] 21 December,” says Richard Stroman, a mechanical engineer from the Naval Research Laboratory Chemistry Division. “Despite all of that, Hybrid Tiger performed well.”

Because the UAV performed well in poor conditions, engineers with the Naval Research Laboratory expect it could fly for more than two days continuously in better weather and sunlight. The laboratory plans such a demonstration later this spring.

The Hybrid Tiger is powered by a high-pressure hydrogen fuel tank and fuel cell system during the night and high-efficiency photovoltaic solar panels during daylight.

Algorithms developed by the Naval Research Laboratory allowed a similar unmanned sailplane to fly 61.3nm (113km) over 4.5h using only thermal columns to periodically gain altitude, according to a programme presentation posted online. 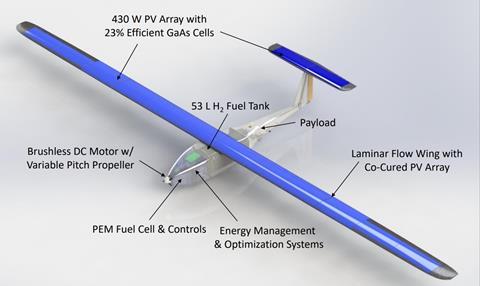 Because hydrogen fuel can be harvested from water using solar panel-powered electrolysis, the Naval Research Laboratory sees the technology as a way to break free of aviation gas supply chains.

“The use of hydrogen fuel not only enables long endurance; it also makes it possible to produce fuel locally,” says Stroman.

Ultimately, the laboratory says it wants to transition the hybrid system to US companies so that the technology can be used to improve the endurance of operational UAVs.