The US Air Force (USAF) has awarded contracts to nine more companies for its artificial intelligence Skyborg programme.

The awards are part of a second phase of the “Skyborg Prototyping, Experimentation and Autonomy Development” programme, the service said on 29 September. 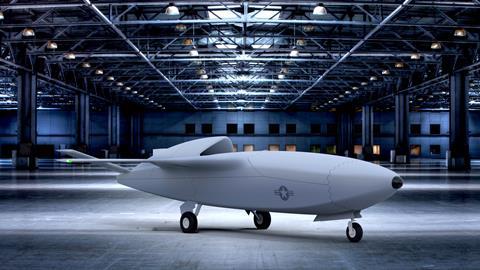 Skyborg is an effort to develop an artificially intelligent software, and related programs and hardware, to control attritable unmanned air vehicles (UAVs). The programme would allow different low-cost aircraft to autonomously work together, but also as loyal wingman platforms alongside manned aircraft. Attritable is a class of UAV that is cheap enough to lose during combat: between $2 million and $20 million per unit, according to the USAF.

“The intent of Skyborg is to integrate an autonomy mission system core and suite of services with multiple low-cost air vehicle systems, each designed to perform one or more mission types,” the USAF wrote in an announcement of the programme in May.

In July, the service announced that it had awarded the first phase of Skyborg development contracts to Boeing, General Atomics Aeronautical Systems, Kratos Unmanned Aerial Systems and Northrop Grumman.

Now, 13 developers are competing for a share of up to $400 million-worth of Skyborg indefinite-delivery/indefinite-quantity contracts. The nature of each company’s development work is undisclosed. It is not clear to what extent the companies are competing against each other or are developing complementary systems to be integrated together.

“This second phase of awards establishes a diverse and competitive vendor pool by adding several non-traditional and traditional contractors we saw as important additions to the effort,” says Brigadier General Dale White, USAF programme executive officer for fighters and advanced aircraft. “The diversity of approaches and backgrounds allows us to access the best industry has to offer.”

Update: Article changed on 2 October to reflect correct spelling of Autonodyne, in place of the orginal spelling provided by the USAF which was incorrect