GTR has picked Penang, Kota Kinabalu, as well as Sandakan as locations for new facilities, as it looks to grow its cargo handling footprint in Malaysia. 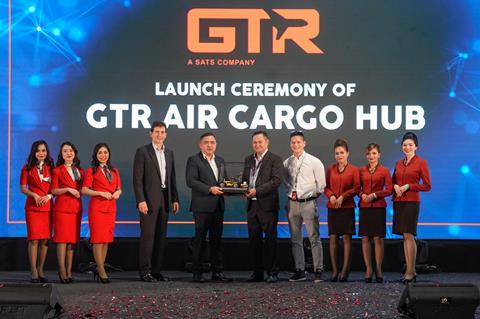 It is unclear when these three new locations will be opened, but GTR chief executive Kevin Chin tells FlightGlobal that land in Penang and Kota Kinabalu have already been identified.

These expansion details were disclosed as the company opened its first air cargo hub at Kuala Lumpur International Airport (KLIA).

The 93,000 sq ft facility is built on the former grounds of KLIA’s low-cost carrier terminal. AirAsia adds that the facility was built at a cost of MYR 23 million ($5.53 million).

Among its features is a purpose-built 10,000 sq ft cold-chain facility, meant for handling perishable items, as well as pharmaceutical products.

Chin says he believes that with GTR’s new hub, air cargo movement into and out of KLIA will grow.

While GTR is primarily fulfilling ground handling requirements for the AirAsia Group of carriers in Malaysia and Singapore, Chin says the company is not in a hurry to “actively look” for third-party airline customers.

“We just started, and to be a full ground handler, we need [cargo facilities], and we need offices in KLIA [main terminal], which we currently do not have.

“We are not active looking for airline customers yet, because we need to build capabilities [first], before we can move to that part of the business,” says Chin.

GTR was established on 1 November 2017, which saw SATS and AirAsia enter into a share swap and sale deal, to gain an interest in each other’s ground handling units.

Separately, SATS chief executive Alex Hungate adds that GTR is also looking to expand its ground handling capabilities to countries in the region.

It currently handles an average of 475 flights daily across 19 airports in Malaysia and Singapore.

Hungate told reporters that the firm was looking at countries such as Indonesia, the Philippines, as well as Thailand, all of which have operations from AirAsia Group carriers.

Malaysia transport minister Loke Siew Fook, who was also at the launch event, urged private entities — like the AirAsia Group — to help move the country closer to its goal of being a logistics hub.  Says Loke: “I would also like to see GTR replicate this facility…to other airports in Malaysia to add further value to our ambition of developing Malaysia as a logistics hub.”