Operators of various Boeing aircraft types including the 787 and 777 are being warned of misleading pitch guidance during glideslope interference on ILS approaches.

It states that Boeing and relevant suppliers are working on software updates intended to correct possible “erroneous” guidance arising from glideslope “anomalies” during ILS approaches.

If crews follow misleading information from the AFDS after disengaging the autopilot, the aircraft could potentially enter “dangerously steep” approaches – potentially preceding a short landing – or an unusually long approach resulting in a late touchdown, says the FAA. 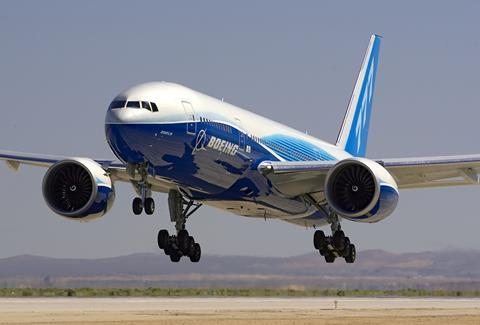 Among the types encompassed by the FAA bulletin is the 777

It states that such deceptive information relating to pitch guidance has affected a number of aircraft when capturing or tracking the glideslope, according to operator in-service reports received.

Investigations have revealed that this guidance occurred mainly during glideslope capture at the same time as ILS glideslope signal interference.

Such interference typically occurs when vehicles or aircraft affect the localiser or glideslope signal.

Boeing issued a notification last October setting out operational instructions for AFDS use when these signals are degraded or unstable, and advising of possible cockpit effects.

While the FAA has stopped short of publishing an airworthiness directive, it is recommending that operators of the aircraft types involved incorporate the actions outlined by Boeing. It is also considering a possible installation mandate once corrective software is available.