Critical to pilots’ acceptance of the Boeing 737 Max’s re-entry into service is the assurance that a serious out-of-trim situation can be easily resolved without the risk of manual controls becoming impossible to manipulate owing to aerodynamic forces.

Not only will aircraft need to be modified but Max simulators will also have to be upgraded to ensure they accurately replicate the trim characteristics and the forces pilots will encounter.

Investigation into the loss of an Ethiopian Airlines 737 Max highlighted the crew’s vain attempt to counter a significant trim imbalance – caused by the speed-trim system’s controversial MCAS software – by using the stabiliser trim wheel at high airspeed.

The US FAA states that the force requirements to manually trim the 737 Max were an “area of intense focus” for the Ethiopian accident inquiry.

Modification of the Max’s flight control software limits the maximum mis-trim that can occur for any foreseeable failure of the aircraft’s speed-trim system, of which MCAS is a part.

The FAA says this ensures the pilot can maintain pitch control using only the control column, “without requiring exceptional pilot skill, strength or alertness” – a response to comments received during consultation which suggested that pilots ought to undergo annual strength tests.

While the FAA is confident that the control column would be sufficient to deal with trim issues, it has also evaluated the manual trim system in the “unlikely event” that manual trim would be necessary.

This evaluation included analysis of manual trim-wheel forces across various scenarios and testing to assess the strength capability of an “anthropometric cross-section” of both male and female pilots.

Flight-testing under maximum out-of-trim conditions – beyond those possible for failure of the revised MCAS – has served to validate the trim-wheel forces as well as the crew’s ability to control the aircraft.

“Manual trim-wheel forces meet FAA safety standards and do not require exceptional pilot skill or strength nor any special or unique handling techniques as suggested by some of the commenters,” the regulator states, adding that improved ‘runaway stabiliser’ procedures will further ensure that control forces remain “manageable”.

These procedural revisions include specific notification to pilots that reducing airspeed lowers the air loads on the stabiliser, in turn reducing the effort needed for manual trim. 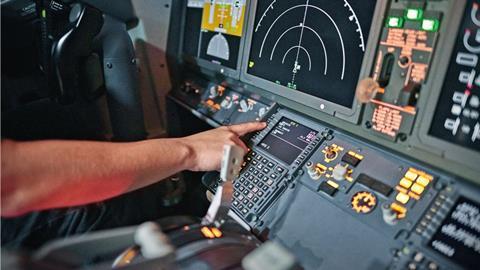 The European Union Aviation Safety Agency has conducted its own review of the Boeing modifications and the FAA’s analyses.

EASA says the forces needed to operate the trim-wheel have been re-evaluated and it is satisfied that pilots will “not be faced” with a situation in which these manual forces are too high to recover control in the event of a trim runaway.

It says it proposed a methodology for Boeing to demonstrate adequate forces against pilot strength, which was subsequently adopted.

“This requires that a single pilot at the lower end of the human capability should be able to move the trim wheel, using one or two hands, for all of the out-of-trim conditions which could result from failures not shown to be extremely improbable,” says EASA.

Its technical investigation paid “special attention” to trim runaway scenarios and found that, following the flight-control software changes, the maximum trim-wheel forces are “acceptable”, noting that new 737 Max pilot-training requirements will include a practical focus on stabiliser trim, runaway stabiliser, and MCAS functionality.

Central to this pilot training, and the re-introduction of the 737 Max to operations, is the need for flight simulators to reflect the modified aircraft’s behaviour – accurately reproducing not just the aerodynamics but the effects felt by the pilots. 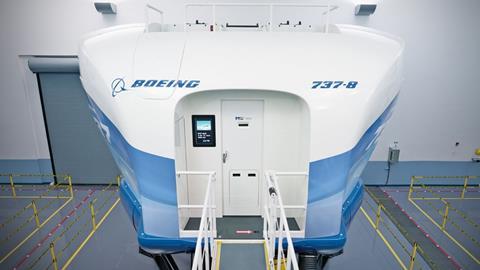 Simulators will need to have their programmed operating characteristics modified in accordance with the FAA and EASA airworthiness directives for the aircraft.

Training organisations will be required, in particular, to assess and validate their simulators’ manual trim for proper control forces.

“Whenever the forces are not adequate to meet the training objectives, the [simulator] operator must declare the [simulator] unsuitable to conduct training on manual stabiliser trim wheel,” says EASA’s directive. The FAA’s directive has a similar instruction, stating that the simulator operator “must not allow” use of the device for trim-wheel training in such circumstances.