Dual-control inputs from a Condor Airbus A320’s pilots badly obstructed its response to collision-avoidance orders during a low-altitude conflict, investigators have determined.

The incident culminated in a serious air-proximity encounter and a terrain alert, shortly after departure from Kavala airport in Greece on 16 August 2018.

After the aircraft (D-AICD) lifted off from runway 23L, bound for Munich, it turned right over the coast to head for the XERIS 1C north-west outbound track. The A320 was cleared to climb to 24,000ft.

But the first officer, who was flying, saw a conflicting aircraft – a Hughes 369HS helicopter – on the collision-avoidance system display immediately after the turn, and both pilots tried to establish visual contact. 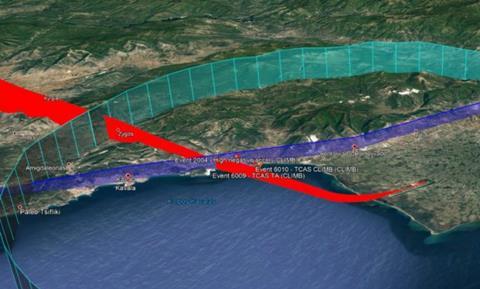 As the aircraft climbed through 2,635ft, still approaching the shoreline, the collision-avoidance system instructed the crew to maintain its 1,800ft/min vertical speed.

But the first officer “did not follow” this instruction, says the Greek transport ministry’s investigation authority, instead commanding nose-down and reducing the climb rate to 1,100ft/min.

This rate continued to decline to 500ft/min and, as the aircraft passed 2,730ft, the collision-avoidance system reversed its instruction and ordered the crew to descend.

The first officer initially responded with a nose-up input before quickly switching to nose-down, at which point the captain also applied nose-down input without first following the procedure to take over control.

As a result, says the inquiry, the first officer did not realise the aircraft was responding to dual command inputs.

The first officer then attempted to reduce the nose-down attitude because he believed the intruding helicopter was beneath the A320 and because – being unaware of the captain’s inputs – he was also confused by the aircraft’s response to his sidestick.

With the aircraft at 2,763ft and the helicopter at 2,869ft the collision-avoidance system ordered an increased rate of descent. The first officer again initially gave a nose-up command, followed by nose-down, while the captain applied nose-down.

The combined nose-down inputs of the pilots generated a high negative-g load, prompting the first officer to react with a nose-up command.

At their closest point the two aircraft were separated by 208ft vertically and less than 550ft horizontally. Weather conditions were good at the time.

Neither pilot recalled whether the aircraft’s automated systems signalled a dual-input warning.

The overall average result of the summed inputs from the pilots’ commands had led the aircraft to descend, but as it neared 2,400ft the pilots received a terrain caution indicator from the ground-proximity warning system, because the jet was losing height as it neared a mountain ridge rising to 3,000ft.

According to the captain’s testimony to the inquiry, he immediately declared that he was taking control of the aircraft, engaged go-around thrust and pitched the aircraft 11° nose-up. Within a few seconds of the terrain caution, there were no further inputs from the first officer.

Investigators state that the helicopter pilot had not complied with its authorised altitude of 2,500ft.

But they point out that the first officer’s response to the collision-avoidance system was “not in accordance” with its instructions, and says the captain’s unexpected intervention complicated the situation. Condor should underline to pilots the importance of following the correct procedure for taking over control, the inquiry recommends.