In November 2017, an Indonesia AirAsia first officer assumed the departure runway from Perth would be the same as the arrival runway, and inputed the wrong data into the flight management guidance system.

As a result, the Airbus A320 made a left turn after take off that was lower than minimum specified height, and deviated from the flight path instructed by air traffic controllers.

In its final investigation report, the Australian Transport Safety Bureau (ATSB) says that “deviating from standard procedures, even slightly, can render them ineffective and result in errors.”

Investigations revealed that on 24 November 2017 the aircraft, registered PK-AZE, was preparing to depart Perth for Denpasar. As part of pre-flight checks, the first officer, who was the pilot flying, had to input flight data into the flight management guidance system (FMGS).

He programmed the arrival runway, 03, into the system, “as experienced on previous occasions”.

Investigations found out that he did not follow the airline’s standard procedure of first listening in to the automatic terminal information service, which stated that the runway to be used was the opposite, Runway 21.

The captain was also found to have not listened in to the information service, and “likely relied on the briefing conducted by the first officer”.

The ATSB adds: “Despite the various cues available to the flight crew, including several ATC instructions for using runway 21 and airport signage, and the flight crew reporting feelings of unease about the flight preparations, the incorrect programming of the FMGS was not detected.”

Shortly after taking off from Runway 21, the aircraft flight director indicated a left turn, as the next programmed waypoint was behind the aircraft and in the opposite direction. 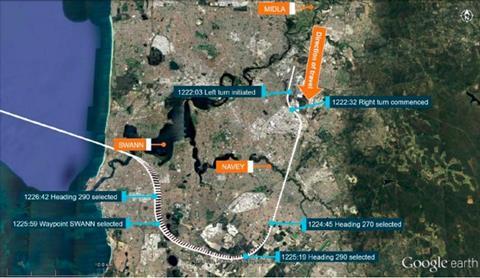 Perth ATC noticed the deviation and corrected the crew’s heading. The crew also noticed the error and turned the aircraft to the correct track. However, instead of selecting the heading assigned by the ATC, the captain reprogrammed the correct flight plan in the FMGS.

“This resulted in the aircraft turning through the assigned heading, requiring further instructions by ATC,” the ATSB states.

It notes that the ATC was “unaware of the nature of the problem” and was not “utilised fully” to assist the flight crew.

The aircraft, which was carrying 145 passengers and six crew, finally returned to its planned track and continued to Denpasar without further incident.

Following the incident, Indonesia AirAsia has included a “change of departure runway” scenario in its line operations flight training.

It has also rolled out training for its pilots in the area of threat and error management.

The ATSB says the incident “further highlights the significance of stopping and re-evaluating the situation while on the ground when there is a feeling of uncertainty about the flight, even if it results in undesirable delays”.

It adds: “This provides an opportunity to detect errors before they affect operations. Once airborne, workload and time limitations become even more critical due to the rapidly changing situation.”