Canadian investigators have found that belated braking during a Boeing 747-400F’s landing at Halifax led to its overrunning the runway and being written off as a result of substantial damage.

The Sky Lease Cargo aircraft’s crew, arriving from Chicago on 7 November 2018, had conducted an ILS approach in darkness to Halifax’s wet runway 14 after unwittingly believing the longer runway 23 was unavailable.

NOTAMs had advised that runway 23 threshold was displaced for repairs, and the landing distance was reduced. But Transportation Safety Board of Canada says the “ineffective” presentation style of NOTAMs led the crew to think the runway was unavailable owing to approach restrictions.

The crew instead chose to land on the shorter runway 14, about 7,700ft in length, thinking it was the only option.

Although a shift in the wind direction prompted a change in arrival runway from 14 to 23 – while the 747 was still 52nm from the airport – this was not communicated to the crew, although it was broadcast on the automated terminal information system.

Only when the aircraft was 80s from the runway 14 threshold did the crew discover that it was subject to a tailwind component. But with only limited time to touchdown the pilots did not recalculate the landing performance data to confirm sufficient runway length was available.

While the unexpected tailwind did not extend the required landing distance beyond the runway length available, the inquiry says a “rapid succession” of events upon touchdown meant the aircraft did not brake sufficiently. 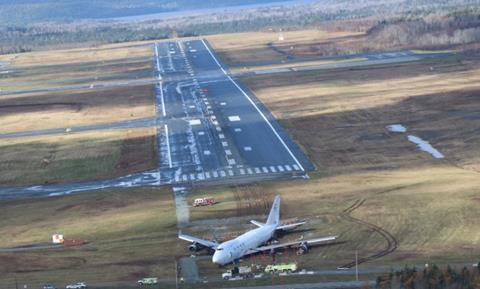 Source: Transportation Safety Board of Canada via Steve Lawrence

The jet touched down “firmly” at 179kt groundspeed, about 1,350ft beyond the threshold, crabbing 4.5° to the right.

Although the spoilers began to deploy, the investigation found that the thrust lever for the outboard left-hand Pratt & Whitney PW4000 engine advanced beyond its idle position.

This went unnoticed by the crew, says the inquiry, and the reason for the lever movement could not be determined. Reverse-thrust was engaged only on the other three engines.

The shift in the lever was critical because it caused the spoilers to retract and the autobrake to disengage. The aircraft’s weight-on-wheels switches reverted momentarily to ‘air’ mode before transitioning again to ‘ground’ mode.

Investigators state that the right crab, combined with a crosswind component and the asymmetric reverser selection, caused the aircraft to deviate to the right of the centreline.

About 6s after touchdown the outboard left-hand thrust lever was retarded to just above idle, allowing the spoilers to deploy fully.

But the first officer, the monitoring pilot, was focused on the lateral drift and required callouts for the position of deceleration devices were not made.

“Without the benefit of the landing roll-out callouts [the captain] did not recognise that all of the deceleration devices were not fully deployed and that the autobrake was disengaged,” says the inquiry.

Eight seconds into the landing the captain realised that the 747 was not decelerating as expected and began using manual braking, using the rudder pedals to try to regain the centreline.

With just 800ft of runway remaining the aircraft was still travelling at 100kt and, although deceleration was markedly greater over the subsequent 7s, it failed to stop and overran at 77kt. 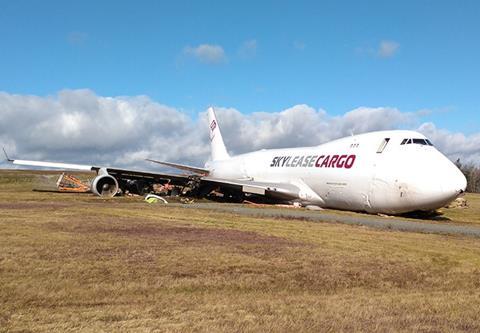 The jet ran over rough ground and collided with the ILS localiser antenna at 50kt, before coming to rest 270m past the opposite-direction runway threshold and 21m to the right of the extended centreline. It was also less than 50m from a public road.

“During the overrun, the aircraft crossed a significant drop [of 2.8m] past the end of the runway and was damaged beyond repair,” the inquiry says. All three crew members suffered minor injuries but the fourth occupant, a deadheading senior captain, was uninjured.

The investigation notes that the crew was fatigued, operating a night flight through the circadian trough and having had “insufficient restorative sleep” in the previous 24h. This would have “degraded” the pilots’ performance, it adds.

It also points out that the accident illustrates the additive effect of minor issues.

“Although the aircraft was flown within the stable approach criteria, the accident demonstrates how several factors affecting landing distance – although individually small – can combine to result in a reduced margin of safety,” it says.