"We are carriers in Latin America, and Latin America has ups and downs. And we are used to that," LATAM chief executive Enrique Cueto says at the ALTA Airline Leaders Forum in Brasilia.

Much of the event involved discussion of those ups and downs – primarily the downs, among them political uncertainty, social strife, economic troubles, regulatory barriers and high taxes. 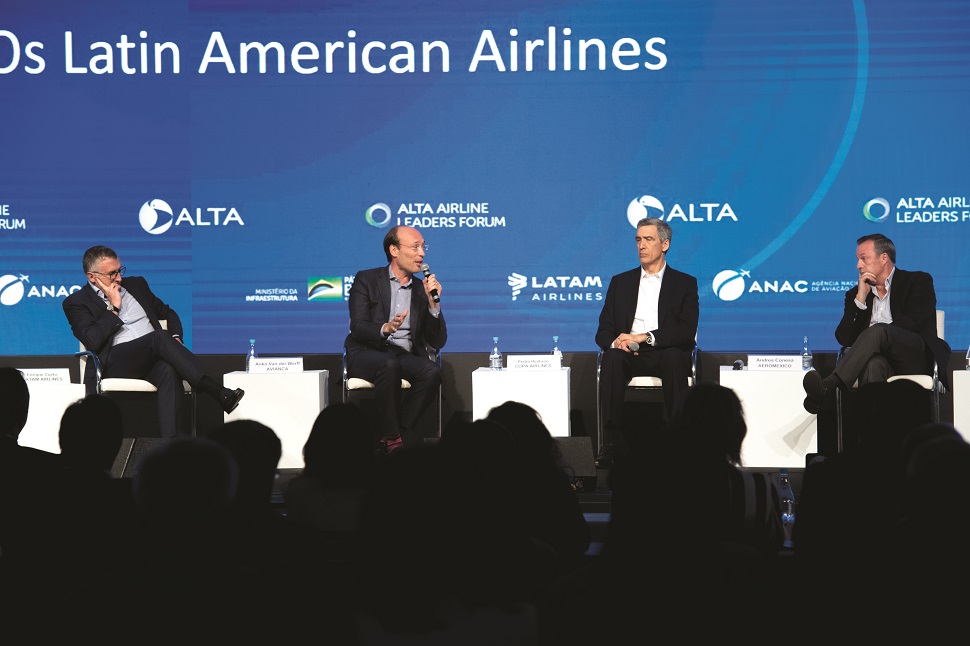 Additionally, voters in Argentina just elected the country's next president, Alberto Fernandez, a populist who some business people fear will reverse the recent pro-business shift.

Since that shift, Norwegian Air Argentina, Flybondi and JetSmart have started services in the country.

"I have a feeling that nothing is going to really change," says LATAM's Cueto of the Argentine election.

He suspects the country's government, regardless of who holds power, will decide against handing massive subsidies to state carrier Aerolineas Argentinas.

"No government is going to go on acting in this way. They need to invest in hospitals and more important areas. We do not need to fear," adds Cueto.

Copa Airlines chief executive Pedro Heilbron says political changes in Argentina have affected that country's domestic air travel market significantly more than its international one. He downplays the impact on Copa, which flies to several Argentine destinations from Panama City.

"The opening of the airline market in Argentina in recent years, in the domestic market, has been very significant. With regards to the international market, it has not been as revolutionary," Heilbron says.

Chief executives also say they are adjusting to an environment in which joint ventures and equity investments have become commonplace.

Such deals include Delta Air Lines' plan to purchase 20% of LATAM Airlines Group for $1.9 billion, and the US carrier's 51% ownership of the parent of joint-venture partner Aeromexico.

Likewise, United Airlines owns part of Avianca's largest shareholder and is working to close a three-way joint venture with Copa and Colombia's Avianca.

"In some way [it] gives greater validity to our need to have a good agreement to generate a balance that is good for the region," he says.

"The LATAM-Delta news is good for us," adds Avianca chief executive Anko van der Werff, noting such arrangements have become standard. "This is not the future, this is today."

LATAM's Cueto says the pending Delta-LATAM deal came as unexpectedly good news while his carrier was wrestling to close a proposed joint venture with American Airlines. A Chilean court had blocked that deal, creating uncertainty about whether it would ever close.

"This problem… became an opportunity. Actually, [it] gave us a long-term option that's extraordinary," Cueto says. LATAM has since ditched the American JV in favour of the Delta investment.

"They made an offer that was hard to turn down," he adds of Delta.

Carriers in the region face a range of other struggles.

Avianca's van der Werff has been working to return his financially troubled carrier to profitability. Avianca is in the midst of a turnaround plan that involves improving schedules at its hubs and cutting domestic capacity in favour of international routes.

Upon arriving as chief executive earlier this year, van der Werff discovered Avianca to be slow-moving, needing a spark.

"What we lack is speed," he says, describing the company's culture as perhaps too "democratic".

"Sometimes it doesn't work. We have to make decisions. I have seen so much said about different topics but nothing gets done. Teamwork and speed wins."

Now Avianca is working to build up a stronger presence in Brazil, van der Werff says.

Perhaps no country presents more of a challenge to Latin American commercial aviation that Venezuela, where social unrest, government policy and economic upheaval have driven most carriers out.

"Venezuela has slowly disconnected itself from the rest of the world," says industry group IATA's regional vice-president for the Americas Peter Cerda. "Its aviation industry is in havoc."

Airlines globally still have billions of US dollars trapped in the country due to an inability to convert Venezuelan bolivars into other currencies.

For several years, airlines and IATA worked unsuccessfully to repatriate those funds.