One of this year’s Paris debutants has a familiar look, but is an almost entirely new aircraft, albeit one developed from a long pedigree of light transport aircraft.

The Antonov An-132D has gone from drawing board to international air display in remarkably quick time. It was revealed at Le Bourget in 2015 and the An-132D demonstrator flew at Kiev on 31 March this year. The An-132 is a joint venture between Ukraine’s Antonov and Saudi partners King Abdulaziz City of Science and Industry (KACST) and Taqnia Aeronautics Company. Derived from the An-32 of 1976 (itself a development of the An-24 of 1955), the An-132 has been significantly modernised and Westernised. Its engines are Pratt & Whitney Canada PW150A turboprops driving six-bladed Dowty R408 propellers. The two-person cockpit features Honeywell Primus Epic 2.0 avionics. Other Western suppliers include Liebherr and Crouzet. Although the fuselage cross-section is the same as the venerable An-32, the only common component carried over from the An-26/32 family is the tail ramp.

The An-132 has a MTOW of 31.5t, giving an increase in payload to 9.5t from 7t on the An-32. The new engines and propellers give improved hot and high performance, allowing operation on runways up to 4,000m altitude and improving fuel performance. The flight from Kiev to Le Bourget used only 900kg of fuel, says Dr Alexander Los, head of Antonov’s design organisation. 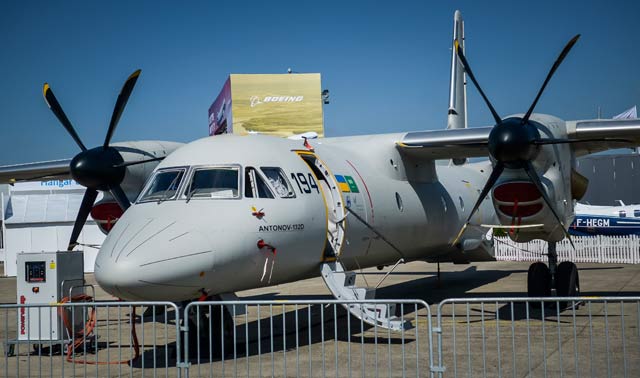 Saudi Arabia requires up to 80 An-132s, but whether for the Royal Saudi Air Force, the National Guard or both has not been revealed. Although Ukraine has not committed to any orders, the aircraft would appear to have significant export prospects. Speaking at Le Bourget, Gen Ali of the RSAF said: “Today we have been approached by so many countries who would like to purchase [An-132] cargo and special mission aircraft”. Electronic warfare, firefighting and maritime patrol versions have been proposed although not yet funded.

Dr Khaled Alhussain, the general director of the Office of Special Programmes at KACST, says the driving factors of the An-132’s design have been fuel consumption and integration of digital avionics. Two teams of engineers have been working on the design, one in Kiev and one in Saudi Arabia, and 50 Saudi engineers have graduated from Antonov’s technical school. Up to 150 Saudi engineers will eventually be involved in the project.

A second aircraft, which will be the An-132 series prototype, will fly within 18 months. “The programme schedule is very tight. There is not even time for a vacation,” says Antonov’s Los. After certification, the production phase will begin. Initially aircraft will be built in Kiev from parts made in both Ukraine and Saudi Arabia. Saudi-made parts will account for 18% of the airframe, mainly composites. The second phase, beginning in 2021, will see some aircraft assembled in Saudi Arabia, the proportion depending on profit, says Alhussain.

Antonov and its Saudi partners are discussing future co-operation in aircraft development and assembly. At Le Bourget in 2015 Antonov also unveiled the An-188, essentially a turbofan version of the An-70 turboprop freighter, of which two were built. Little has been heard of the An-188 since, but Los says it is one of the future products under consideration for joint development with Saudi Arabia as part of the oil giant's Vision 2020 plan to replace fossil fuel-based industry with high technology. The An-132 project represents about 40% of Vision 2020 investment to date.