The signs are that after the many hurdles that had to be overcome – and several false dawns for its revival – the Boeing 737 Max should finally return to the skies before the end of 2020. But the recertification will be just the start of a new set of challenges for Boeing, its customers, and the wider industry. There are myriad issues that will come into play as the programme is revived more than 20 months since its grounding, including some linked to the airline trading conditions caused by the coronavirus pandemic.

There are questions around areas such as the pace of the Max fleet restoration (among the installed fleet and the hundreds of built but undelivered airframes); operators’ appetite to add Max aircraft and crew-training capacity; the potential displacement effect on other fleets; and the alignment of regulatory approvals worldwide. 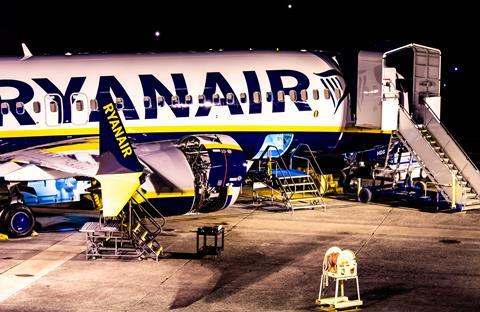 But one crucial parameter is beyond the industry’s control: the acceptance by the travelling public to fly on the aircraft. While the narrative on the Max’s safety failings has perhaps been overtaken by the Covid-19 pandemic, media attention around its re-introduction could quickly revive painful memories. As it stands, there are 385 delivered Max aircraft grounded worldwide, according to Cirium fleets data. Cirium estimates that approximately another 450 Max airframes are built and stored awaiting delivery.

If, as is now widely expected, recertification by the US Federal Aviation Administration (FAA) is imminent, that should clear the way for an almost immediate resumption of deliveries to US airlines. It is likely that the FAA’s approval will be shadowed promptly by authorities participating alongside it in the 737 Max Joint Operations Evaluation Board (JOEB): Brazil, Canada and the EU. The approval status in key Max market China is less clear but might be expected to follow within months of the FAA’s decision.

If US Max clearance does come soon, then Ascend by Cirium estimates that 2020 deliveries could just reach double figures. As Boeing works to clear the backlog of built aircraft, along with integrating deliveries from the Renton assembly line, we project annual shipments reaching 430 in 2021 and 480 in 2022, before declining below 400 over the following two years. Assuming deliveries are a mix of stored and new-build airframes, we estimate that the backlog of parked aircraft will be cleared by the first quarter of 2023. The delivery rate would then fall slightly to approximately 390 in 2023, with production stabilising at a monthly rate of 31 aircraft. 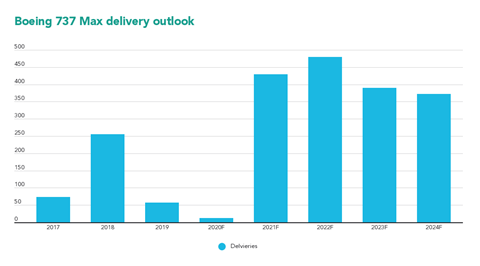 The resurrection of the mothballed, undelivered aircraft will be complicated by some airframes now being unallocated due to cancellations or rescheduling. These aircraft would require some cabin reconfiguration and estimating the number involved is imprecise. But with customers potentially able to cancel penalty-free if delivery is not achieved within 12 months of the original contractual date, then the number is potentially high.

Ascend by Cirium estimates that Boeing has already shed approximately 1,300 Max orders in the wake of the grounding, including 553 confirmed cancellations plus more than 750 orders that are subject to ASC 606 accounting adjustments – orders that are still firm but which the airframer believes are unlikely to complete. Some of these changes may affect aircraft that have already been built. The Max’s ASC-adjusted firm backlog stood at 3,357 aircraft at 30 September.

There will be several drivers determining the pace of return to service of the 385 aircraft grounded in March 2019. Once approval is received within each operator’s jurisdiction, every aircraft will have to undergo post-storage checks and testing. From a demand-side perspective, airlines will look at their fleet-planning strategy amid the downturn and training availability required for flightcrews.

But there will certainly be implications for incumbent single-aisle fleets, as amid the crisis the Max’s absence has helped the supply and demand balance. Its reintroduction will create a displacement effect at operators where they will replace rather than supplement existing aircraft – predominantly 737NGs.

The likelihood is that each Max returned to service or delivered will replace a 737NG on a one-for-one basis. This will increase supply when capacity growth is off most airlines’ agenda, and so there will be implications for values and lease rates – not just in the 737NG community but also across the wider single-aisle spectrum.

Max Kingsley-Jones is a senior consultant at Ascend by Cirium