DHL Express and Singapore Airlines have entered an agreement for the operation of five Boeing 777Fs in the Asia-Pacific and to the Americas.

The aircraft will feature a joint DHL, SIA livery

The aircraft, to be based at Changi Airport, will bear a special joint livery. SIA will provide flight crews and maintenance for the aircraft.

“This new freighter operation will support the fast-growing e-commerce segment, in addition to other key business segments that rely on trusted express services that DHL excels in providing.”

Under the arrangement, DHL will provide five 777Fs, with SIA to crew and maintain the aircraft

“With the deployment of five Boeing 777 freighters, we can expand our express service linking the Asia Pacific region with the Americas,” says DHL Express executive vice president Travis Cobb.

“Following the pandemic, we see good prospects for strong growth in trans-Pacific trade lanes. By collaborating with Singapore Airlines, we see a unique chance to establish a long-lasting relationship with a long-time partner who shares common values and operates at the highest standard.” 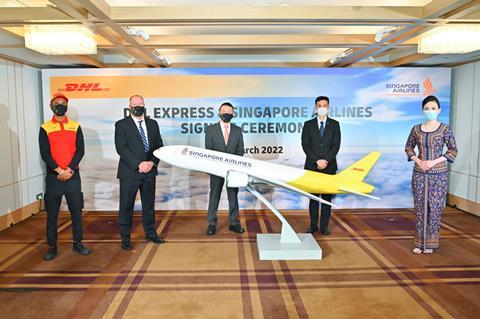 The signing ceremony between DHL and SIA

The announcement follows DHL’s 9 March order for an additional six 777Fs. This brought to 28 the number of 777Fs it has ordered since an initial order made in 2018. A division of Deutsche Post DHL, the carrier has already received 15 777Fs from Boeing.