ANALYSIS: Are small regional jets making a comeback in the USA?

Analysts and investors sounded alarm bells last month after United Airlines announced plans to grow by up to 6% annually until 2020. That reaction focused largely on the headline capacity number and its implications for yields, and less on how the airline planned to achieve that growth.

Buried in United's fleet plan for 2018 was the addition of 40 Bombardier CRJ200s and one Embraer ERJ-145 that, with the aircraft removals also planned, would result in a net increase of 38 small regional jets in its feeder fleet, ending – if only temporarily – six years of fleet orthodoxy. 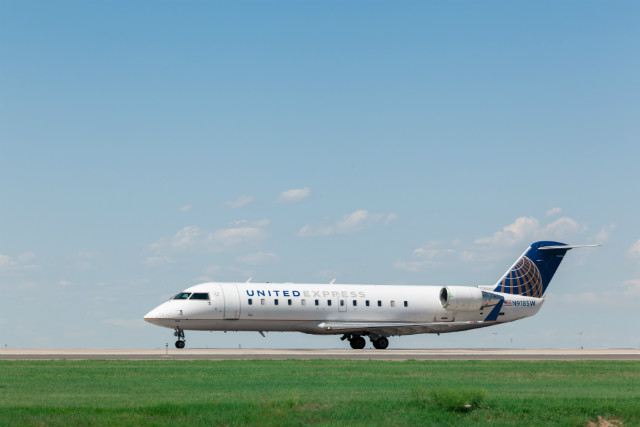 Under its revised plans, the Chicago-based carrier will increase the number of small regional jets, including CRJ200s, ERJ-135s and ERJ-145s, in its feeder fleet to 294 by the end of the year. This follows a steady shrinking of the fleet to as low as 238 aircraft at the end of 2016 from a peak of 361 aircraft in 2013.

United appears alone among the US majors in expanding its small regional jet fleet. American Airlines' small jet count will remain roughly flat at just over 200 aircraft in 2018, even as it brings 28 ERJ-140s back from storage to replace lost CRJ200 lift. Delta Air Lines' fleet of the small jets stood at 121 at the end of December 2017 after declining every year since 2012. 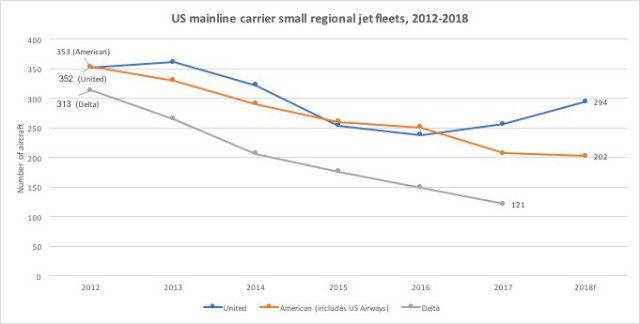 While small regional jets have largely fallen out of favour with the US mainline carriers, they remain to serve a specific market. The aircraft are the only jet option – American, Delta and United will remove their last turboprops this year – to serve small cities such as Ithaca, New York, and Sioux City, Iowa.

The ongoing debate is over how many 50-seat jets are necessary to serve these small cities, with the general consensus being around 100 aircraft.

"An abundance of 50-seaters is simply unsustainable these days," wrote Hunter Keay, an analyst at Wolfe Research, in a January report on United's growth plans.

Small regional jets are widely acknowledged as inefficient and uneconomic, especially in times of high fuel prices. For example, United's then vice-president of fleet Ron Baur told FlightGlobal in 2013 that the Embraer 175s it had recently ordered were about 10% more fuel efficient per seat than 50-seat jets.

The inefficiency of small jets translates to higher unit costs, but Cowen analyst Helane Becker notes that there is also a unit revenue benefit from their small size.

"Your CASM goes up but so does your RASM. It should be an offset," she says in an interview with FlightGlobal.

Scott Kirby, United's president, said during an earnings presentation on 23 January: "We've got a temporary surge in 50 seaters in 2018 because we don't have a choice today."

Scope limits in the airline's pilots contract cap its fleet of large regional jets, or those with 70-76 seats, at 255 aircraft. It hit that number in 2017. 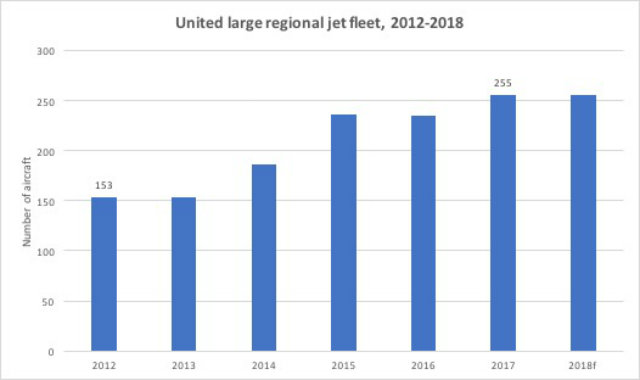 The scope limit, coupled with a readily available supply of 50-seat jets and a drive to reduce aircraft capital expenditures, appear to be driving United's CRJ200 surge this year.

United aims to address scope. The airline plans to push for relief to expand its large regional jet fleet in its next pilots' contract, which could come as soon as January 2019. Negotiations with the Air Line Pilots Association (ALPA) can begin in May.

"We can wind up turning 50 seaters into larger regional jets, but we make some kind of commitment to them, whether it's a growth commitment or jobs," says Kirby. He believes that by continuing to expand the airline's mainline operations it can convince pilots that it does not plan to outsource jobs to lower-cost regional partners if it gets scope relief.

Analysts are wary of this view. Keay expects pilots to demand a "generous raise" in exchange for scope relief in the next round of negotiations.

One growth possibility that Kirby floated in January was the addition of a small mainline narrowbody, like the Bombardier CSeries or Embraer E-Jet-E2 family. While he has previously dismissed the aircraft as uneconomic, the comment perhaps reflects the reality that pilots will want something in return for scope relief and the fact that United cannot achieve its 4-6% annual system growth target through increased utilisation and 50-seat jets alone.

George Dimitroff, head of valuations at Flight Ascend Consultancy, says of the small jet additions: "It might not be the most efficient solution, but it is a practical short- to medium-term solution that allows the majors to boost their hub traffic. In an ideal world they might have preferred more 70-76 seaters but that is not achievable right now."

The low capital costs and "instant availability" of 50-seat regional jets, in addition to the scope constraints, probably contributed to United's fleet plans, he says.

The number of CRJ200 and ERJ-family passenger jets in storage globally peaked at 529 in 2016, Flight Fleets Analyzer shows. This is up from 151 in 2012, when the US carriers began their multi-year shift towards larger aircraft.

At the same time, the number of in-service aircraft fell to 957 at the end of 2017, the database shows. 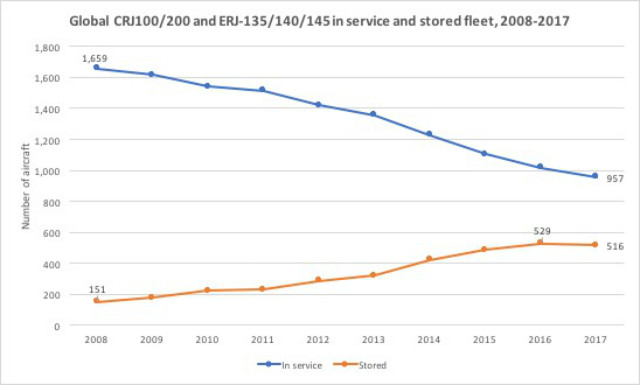 While the small jets themselves may be readily available, the pilots may not be. The USA is in the midst of a pilot shortage that has had an acute impact on regional carriers, including forcing schedule reductions and aircraft delivery delays at Alaska Airlines subsidiary Horizon Air beginning last summer, and Republic Airways' Chapter 11 filing in February 2016.

"Pilots are a limiting factor," Becker says of United's planned regional growth, adding that the life of parts could also prove an issue.

Air Wisconsin, which will operate the additional CRJ200s, will be responsible for pilot staffing and recruitment. The regional airline was not immediately available for comment.

Small regional jets do come cheap. The market value of a 2000-vintage CRJ200 and a 2001-vintage ERJ-145 was $1 million per aircraft in October 2017, the latest Flight Ascend market commentary notes. These values are down 20% and 50%, respectively, year on year.

These numbers must sound sweet to United. Since joining the carrier in 2016, chief financial officer Andrew Levy has focused on reducing annual capital expenditures, with $3.6 billion to $3.8 billion forecast for 2018. Capital investments peaked at $4.7 billion in 2017 after rising steadily in prior years.

United achieved these investment reductions by deferring 61 of 65 Boeing 737-700s on order in November 2016, and buying additional aircraft on the used market, including the Hawaiian 767s due this year.

Any large regional jet or small mainline narrowbody additions to replace 50-seaters in 2019 or 2020 could push annual capital investment back up. What United plans to do, though, remains unclear.

For 2018, passengers and investors will have to sit back and buckle their seatbelts as the 50-seater additions at United are here, for the time being at least.