Delivering a new version of the 737 is old hat at Boeing. Eighteen major models have entered service since the debut of the 737-100 in 1968, including 10 versions of the NG series over the past 19 years alone. In all, 9,448 individual 737s have rolled out of the factory doors in Renton, Washington, through March 2017.

Adding to the tradition later this spring will come the 737 Max 8, after a six-year development. The Max 8 received US Federal Aviation Administration type certification in March. Already following on its heels is the larger Max 9 variant, the first of which rolled out on 7 March and will enter service next year.

As major derivatives of the 737 go, it's arguable whether the 737 Max is even Boeing's most ambitious leap in technology. In the late 1990s, the 737NG series introduced a glass cockpit, larger wing and improved engines. The 737 Max updates the glass cockpit and adds new winglets plus a new engine – CFM International's Leap-1B. 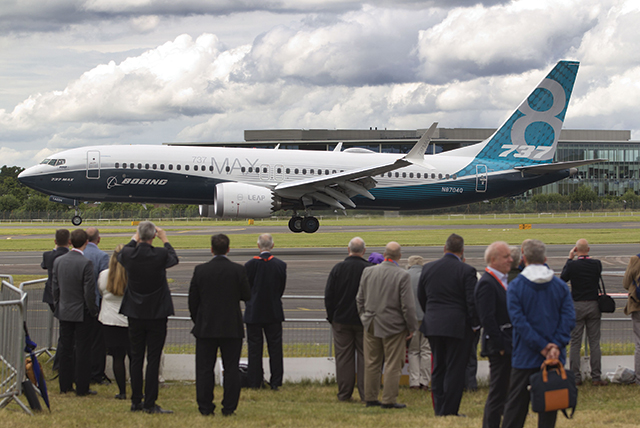 Despite this depth of experience, introducing the 737 Max into operational service will test Boeing's skills in unprecedented ways. Boeing will have to deliver more aircraft to a larger and more diverse group of operators faster than any other model in the company's storied history. It will have to manage the maturity of the 737 Max's onboard network server (ONS), a new and perhaps under-appreciated feature that could prove revolutionary in operating the single-aisle – if it is not undermined by undetected software bugs.

Amid these challenges, Boeing is counting on cash flow from the 737 line in Renton, Washington, to offset declining revenue from the 777 line as it transitions to a similarly re-engined version in 2020. As 777 deliveries drop to as low as 2.5 a month by 2019, Boeing plans to keep pushing 737 deliveries ever higher.

With production already 50% higher than 10 years ago, Boeing plans to increase current output by another 35%, from 42 single-aisles each month to 57 by 2019.

That escalating rate requires the careful orchestration of ramping down deliveries of 737NG-series models, ramping up the Max series, and managing fluctuating rates for special versions such as Boeing Business Jets and the P-8 maritime patrol derivative.

In the past 10 years, Boeing has gained experience from the troubled introduction of the 787-8 in 2011, compared with the relatively smooth entry into service of the stretched 787-9 in 2014. In both cases, Boeing steadily ramped up output while delivering to new customers one at a time. No such luxury will be possible on a 737 assembly line reaching 47 aircraft deliveries a month later this year.

"The deliveries are going to be coming so fast and so furious," says Keith Leverkuhn, Boeing vice-president and general manager of 737 programmes. 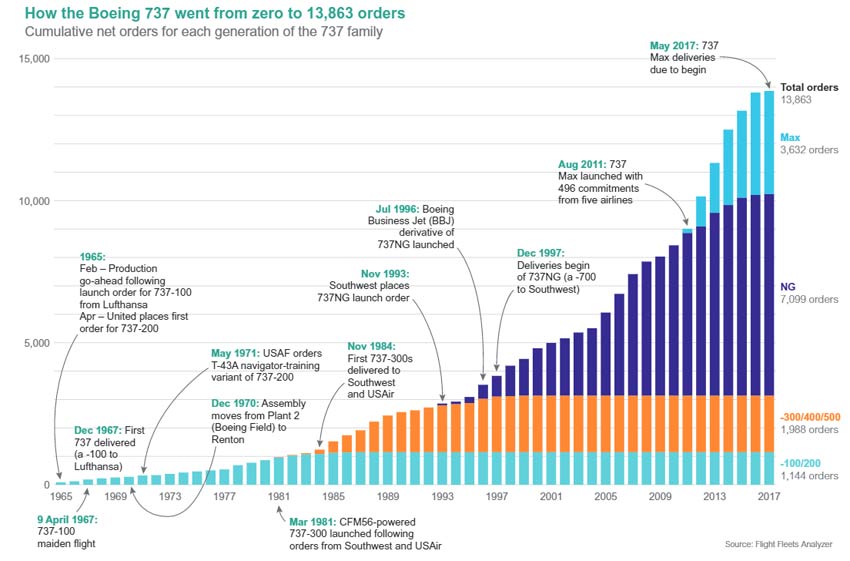 From May until December, the 737 Max will account for about 10-15% of Boeing's single-aisle deliveries, numbering potentially more than 50 aircraft handed over to multiple customers. Boeing opened a third assembly line in the Renton hangar to directly support 737 Max deliveries this year. As deliveries increase, one of the 737NG lines will transform into a mixed line, building CFM56- and Leap-powered models at the same time. Within four years, Boeing expects to be delivering only a handful of 737NGs annually, with the 737 Max occupying the remainder of the production slots at a monthly rate of 57.

Instead of inviting a single customer at a time to come to Renton for flightcrew and maintenance training, Boeing will prepare multiple new customers for the 737 Max 8 at the same time.

"That's going to require some special attention on our part," Leverkuhn says.

Boeing began turning its focus from airworthiness certification to the entry into service last September. In a six-day series of flights using the fourth 737 Max 8 test aircraft, which is equipped with a full interior, Boeing launch customer Southwest Airlines conducted a service-ready operational validation (SROV).

The goal of the SROV is to simulate a typical week in airline service, flying a routine airline schedule to multiple airports. For the 737 Max, Southwest pilots flew the aircraft from Dallas Love Field to Albuquerque, Denver, Chicago, Austin and Phoenix. Every routine function was practised and evaluated, from towing and fuelling, to line maintenance, to checking whether the ground service equipment fits around the gates of various airports. 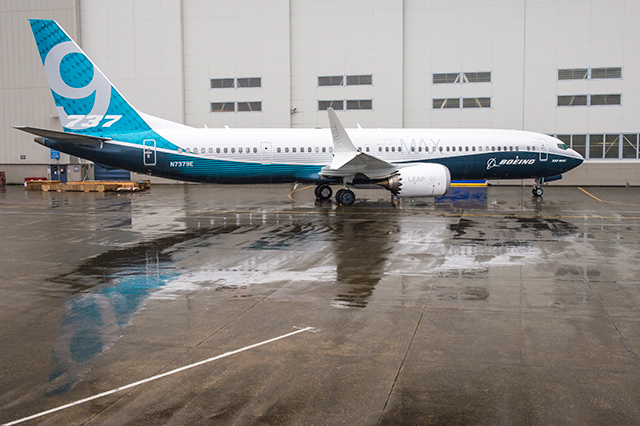 The timing of SROV for the 737 Max, so far ahead of entry into service, may reflect a lesson from the 787-8 experience. Boeing flew a similarly equipped 787-8 to Tokyo Haneda airport in July 2011, only two months before the first production aircraft was delivered to All Nippon Airways. By October, the first 787-8 in ANA livery entered service, leaving precious little time for Boeing to address any issues discovered during the SROV process.

Leverkuhn sees the 737 Max's SROV process as having accomplished its goals. "Both Southwest and we learned," he says. “Most of it was around our manuals – fault isolation manuals. Can they be tweaked to be more efficient? Beyond that, there weren't any glaring learnings.”

One not-insignificant advantage of an aircraft re-engining programme is a basic familiarity among operators with the 737 platform. In many respects, the 737 Max delivered in 2017 follows the same design principles and system architecture of the aircraft family that entered service nearly 20 years ago.

On the other hand, Boeing's modifications to the 737NG are more extensive than simply exchanging CFM56-7B engines for Leap-1Bs. Boeing updated the 737 Max with 787-style wide-format cockpit displays, specially designed split-tip winglets, a relofted tail cone, an extended landing gear, electronic bleed-air valves and the previously mentioned ONS. Most of the modifications were intended to improve fuel efficiency, except for the bleed-air valves and ONS, which should make maintenance easier and faster.

The ONS is a critical upgrade for the 737 as a new generation enters service. It essentially upgrades the 737 fleet with technology developed decades earlier for the 777. The ONS monitors the hardware and software within the 737’s systems, checking for anomalies that can trigger maintenance alerts to pilots during the flight or to maintenance staff after landing. By concentrating the data in a single system, the ONS spares the flightcrew and maintenance staff the burden of troubleshooting dozens of individual line-replaceable units to pinpoint the source of a problem.

As with any new technology, the ONS introduces several new technical components that could become maintenance problems themselves. In particular, the ONS adds a data file server and an enhanced digital flight data acquisition unit (DFDAU). The file server is the hub for monitoring in-flight performance data and transmitting any alerts to a newly expanded section on the pilots' enlarged displays or to the airline's maintenance network on the ground. The DFDAU is designed to store hundreds of gigabytes of flight data, allowing the system to analyse trend data in-flight.

To lessen the risk of the ONS itself posing a maturity problem, Boeing is taking several mitigating steps. First, the ONS destined for the 737 Max was initially rolled into the 737NG series two years ago, giving Boeing time to understand its quirks on a mature platform before introducing it into a less familiar model. The ONS also has functioned on the 737 Max test fleet, allowing Boeing to gauge its performance in the somewhat clinical atmosphere of an airworthiness certification campaign.

With a new, software-intensive system, one of the risks is generating a stream of false alarms, which the pilots and maintenance crews must clear before taking off. Such software bugs were cited as a major reason for the early reliability problems on the 787-8. Leverkuhn insists that Boeing learned from the 787 experience. As difficult a problem as false alarms on the 787-8 proved, the situation would be even worse in the fast-paced, heavy utilisation cycle of a single-aisle product such as the 737 Max.

"We have to have all the maintenance messages truly only show up if there's a problem," Leverkuhn says.

After the painful lessons of the 787-8, Boeing adopted a more cautious approach to introducing new technologies into service. The company's new process emphasised mitigating risk by introducing the new technology first on a mature platform. The 777X, for example, will be partly assembled in a new automated tool called the fuselage assembly upright build (FAUB). Boeing first introduced the FAUB on the existing 777 line more than a year ago. The experience revealed unexpected problems that, if left undiscovered, could have dramatically slowed the ramp-up of the 777X. That same approach is being applied on the 737 Max.

How successfully the new model works will be judged later this year, as the first 737 Max 8 begins moving passengers instead of only test equipment.