The enhanced joint venture will replace the separate existing agreements that Delta has with Air France-KLM and Alitalia on the one hand, and with Virgin on US-UK routes.

The partners say it will allow Air France-KLM, Delta and Virgin, plus Alitalia, to co-ordinate routes and schedules, share revenues and expenses, and jointly market and sell flights, once regulatory approval is granted. Alitalia, which filed for extraordinary administration earlier this year, was not among the partners announcing the new enhanced joint venture.

"With our partners Delta and Virgin Atlantic, we are pleased to reinforce our transatlantic partnership, offering our customers even more choice between Europe, UK and the United States," states Jean-Marc Janaillac, chief executive of Air France-KLM.

The deal is an expansion of Atlanta-based Delta's equity partnership strategy, which it has successfully implemented with Aeromexico, China Eastern Airlines, Gol and Virgin Atlantic.

Equity partnerships allow airline management teams to align and work together, increasing the opportunity for success, argued Steve Sear, Delta's vice-president of international, in response to questions about the strategy during a media briefing on 27 July.

"We take a very active approach where you've seen historically, maybe, [airlines] take a passive role," he said when the proposed partnership was compared to Etihad Airways' equity investments.

High-profile financial challenges at Air Berlin and Alitalia have weighed heavy on Etihad, and were cited by the Abu Dhabi carrier as a factor in its slip to a full-year loss in 2016.

Gol alone among Delta's airline investments has faced financial issues, owing to the recession and political turmoil that enveloped Brazil in 2014. Sear says the US carrier has taken an active role in Gol's restructuring, extending the Brazilian airline a $300 million loan in 2015 and taking over leases for 12 aircraft in 2016.

Sear, meanwhile, says: "When we looked at the global landscape and how it is today, it made a lot of sense to partner."

Executives at Delta have repeatedly cited the expansion of long-haul low-cost carriers, including Norwegian and Wow Air, as pressuring yields and prompting the US airline to re-evaluate its offerings. One element of that was to increasingly focus on flying to partner hubs in Europe, something that the new venture will further enable.

Norwegian plans to grow transatlantic capacity by 58% this year, FlightGlobal schedules data shows. This includes new services from Paris Charles de Gaulle to Orlando, and from London Gatwick to Denver and Seattle.

Paris is Air France's main base, London is home to Virgin Atlantic, and Seattle is a Delta hub.

Meanwhile, uncertainty surrounds Alitalia, in which Etihad owns a 49% stake, as it continues reorganisation efforts. The Italian carrier joined the Air France-KLM and Delta transatlantic joint venture in 2010, and is a partner of both in SkyTeam. It did, though, serve notice on a European joint venture with Air France-KLM as of January this year.

Administrators at the Italian carrier have now launched a search for fresh investment. Reports indicate that EasyJet, Lufthansa and Ryanair, as well as Etihad itself, are among those to have expressed preliminary interest.

The Italian carrier's weakness opens the door to a change of strategy in Rome that could see the carrier becoming a more concerning competitor to the likes of Air France, Delta and Virgin Atlantic, especially if it pairs up with one of the low-cost juggernauts.

"It is true that Alitalia has been one of the elements pushing us to discuss the future of the joint venture, but I will not consider it as the main element," says Gagey.

If all goes according to plan, including shareholder approval and regulatory antitrust nods on both sides of the Atlantic, the carriers hope to have their new joint venture up and running in 2018 or early 2019 at the latest.

"The reason for this venture and its timing is just that it is a very good idea," said Virgin Atlantic's commercial chief Shai Weiss when asked about the timing, during the briefing.

Air France, Alitalia, Delta, KLM and Virgin Atlantic together will control 27.6% of the 84.3 million seats scheduled between Europe and the USA this year, schedules show. Prior to the proposed deal, the four without Virgin had a 22% share of the market.

The proposed joint venture would put them ahead of the immunised joint ventures of American Airlines, British Airways, Iberia and Finnair, and that of Austrian Airlines, Brussels Airlines, Lufthansa, Swiss and United Airlines – the latter tie-up also includes Air Canada – that are both scheduled to have roughly 23.8% shares of the Europe-USA market in 2017, schedules show. 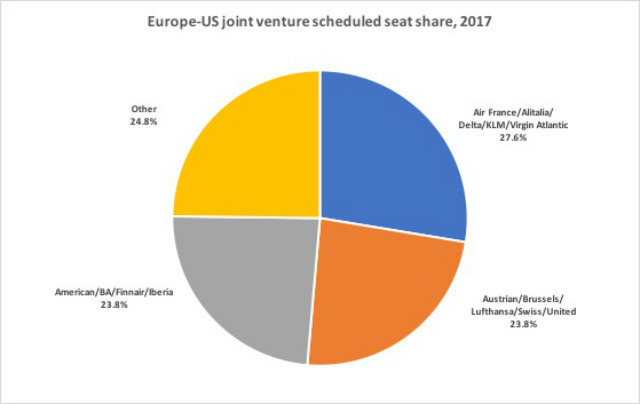 By comparison, Norwegian will have a 3.7% share of the transatlantic market, schedules data shows.

Virgin Atlantic's chief executive Craig Kreeger states that "the next stage of our growth will be at the heart of the strongest partnership for customers travelling between Europe and North America".

He adds: "Together with our friends at Air France-KLM and Delta, we will build on this vision of our teams creating irresistible experiences for customers flying on our network."

In addition to the largest block of jointly managed capacity flying the water jump, Air France, Delta, KLM and Virgin Atlantic will control 86.4% of transatlantic seats from Amsterdam and 70% from Paris in 2017, the single largest shares in each market, schedules data shows. They will be second to only American-BA at London Heathrow with a 23.7% share of transatlantic seats.

American declined to comment on the proposed deal, and United was not immediately available.