Ryanair on 28 March makes its most eye-catching move yet into more mainstream markets, starting to operate at Lufthansa's Frankfurt fortress, but its interest in bigger hubs does not necessarily signal that it is turning its back on secondary airports.

London Stansted and Dublin may lead the way as its biggest airports, but FlightGlobal schedules data for March shows Bergamo's Orio al Serio is its third biggest in terms of seat capacity. 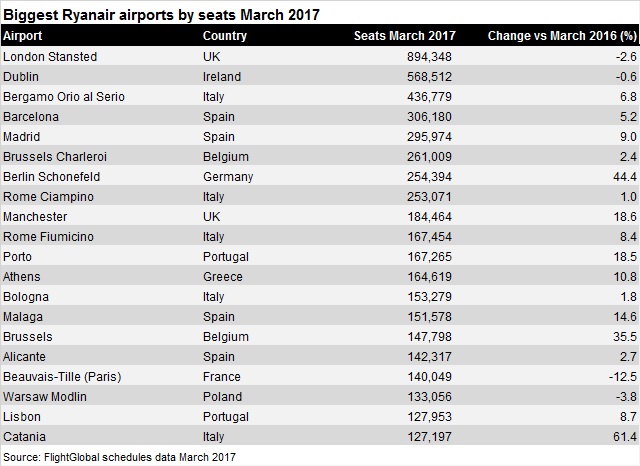 Bergamo, northeast of Milan, was Ryanair's first Italian base when it was established in the spring of 2003, and the Irish carrier's third in continental Europe after Hahn and Charleroi. All three were emblematic not just of Ryanair's pan-European ambitions, but of its model of serving big cities through out-of-town airports: Charleroi for Brussels, Hahn for Frankfurt, and Bergamo for Milan.

Ryanair's launch of services this summer from Frankfurt Main airport means it now serves primary airports in all three of those target cities. But in all three cases, Ryanair still has a larger operation at the alternative airport than at the primary one, and not just because it has been active at these airports for longer.

Bergamo illustrates the phenomenon. Ryanair began serving Milan Malpensa in December 2015, and has quickly built up a presence there, serving nine destinations from the airport. FlightGlobal schedules data shows that it will have 800,000 seats from Malpensa this year.

But growth at Bergamo has continued at the same time. After a stall amid a hiatus in aircraft deliveries, expansion at the airport resumed when Ryanair's new batch of 737-800s started arriving in late 2014. It will offer nearly 5.8 million seats from Bergamo across 2017, FlightGlobal schedules show – an increase of almost a million from two years ago.

Ryanair has also continued to grow at Charleroi. It has added about 400,000 seats at the airport since it launched out of Brussels' primary airport. This, though, falls short of the 1.6 million seats it will have added from the Belgian capital's main airport since launching its base there in 2014.

It is too early to see what impact the launch of operations out of Frankfurt Main may have on Ryanair's Hahn operations. But while Ryanair has been growing its German presence, it has roughly halved seat capacity at Hahn since 2010, FlightGlobal schedules data shows. That was partly driven by cuts in the summer of 2011 following implementation of a German aviation tax. Ryanair's Hahn capacity has steadied since 2014, but remains down.

Ryanair last year disclosed plans to establish a base at Frankfurt's primary airport, initially with leisure routes. It will expand its operation this winter by basing seven aircraft at the hub and spreading the network to 20 destinations, including five in Italy and seven in Spain and the Canary Islands.

"I would have said Frankfurt Main was the next airport [after Heathrow and Paris Charles de Gaulle] where we would never have a base, yet we are opening a base there at the end of March," Ryanair chief executive Michael O'Leary told FlightGlobal earlier this year. "We start with two aircraft in the summer and then it goes up to nine aircraft in the winter.

"But they have room, they have no slot constraints, and they've come up with an incentive programme for low-cost carriers because they want to develop a low-cost business at Frankfurt Main, which is a remarkable development, as I would have said never would we fly to Frankfurt Main."

Where Ryanair serves two airports from the same city, excluding London, it tends to have a distinct route strategy for each.

Ryanair established its presence in Rome at secondary airport Ciampino, but has since developed operations at the Italian capital's main international gateway, Fiumicino. It now largely uses Fiumicino to serve domestic and southern European leisure destinations. Ciampino instead has been the focus for its routes to markets such as the UK, Germany and Scandinavia.

The result is that Ryanair has built a strong presence at Fiumicino – the 10th-biggest airport in its network by seat capacity in March – while maintaining its presence at Ciampino, which is eighth on that list.

Similarly, the airline has continued to grow at Warsaw Modlin, despite launching operations at the Polish capital's Chopin airport in 2016. It has used Warsaw's primary airport to launch domestic flights.

Not all airports fit this pattern, however. Passenger numbers at Girona – near Barcelona, and where Ryanair opened a base in 2004 – have declined from a high of almost 5.3 million in 2009 to 1.8 million by the end of 2015. Ryanair, which opened a base at Barcelona's El Prat airport in 2010, is scheduled to operate this year less than a third of the capacity it did in 2010. Much of the drop came in 2011, Ryanair blaming the collapse of a five-year expansion project at the airport.

Ryanair's return to the UK domestic market in 2014 brought Glasgow's primary airport into the Irish carrier's network, and it has since built a network from the airport that now outstrips its capacity from nearby Prestwick airport.

The backdrop to all of Ryanair's capacity and network decisions over the past couple of years – and for the foreseeable future – is that the airline is in expansion mode. It will have grown its 737-800 fleet by 42 to 383 aircraft over the course of its financial year ending 31 March, and will add 44 aircraft in its 2018 financial year. As a result, it is not necessarily facing either/or decisions on where to grow.

But the Irish carrier's announcement earlier in March that is to establish a base and open seven new routes at Memmingen, located outside Munich in Allgau, illustrates its continued interest in growing from secondary airports.

While Ryanair has helped put several secondary airports on the map and delivered unprecedented growth, these gateways' fortunes are as a result closely tied to the Irish carrier's. At a number of the airports, Ryanair holds more than four-fifths of the seat capacity, with Central European budget carrier Wizz Air almost the only other show in town. At some it is the only scheduled operator.

For these airports, the challenge is to retain growth momentum, both with Ryanair and from other customers.

Again, Bergamo offers encouragement. Traffic has grown at the airport every year except one over the past decade, and was up more than 7% in 2016, to pass 11 million passengers. It now ranks among Europe's 50 biggest airports and has surpassed Milan's slot-constrained Linate in annual passenger numbers. 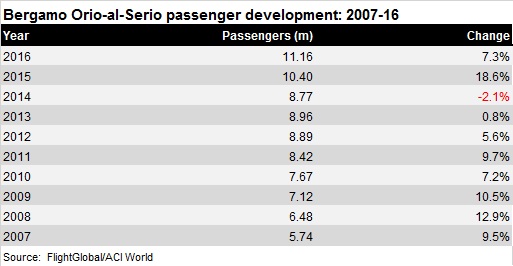 Ryanair is again driving that growth. FlightGlobal schedules data shows that in March the Irish carrier accounted for 85% of seat capacity at Bergamo. And much of this year's growth comes from the same source: Ryanair has in March added links from Bergamo to Bordeaux, Edinburgh, Luxembourg, Oradea, Vigo and Vitoria.

But this summer also includes the first services from Arkia Israeli Airlines and Ukraine International Airlines, serving Tel Aviv and Chernivsti, respectively, to take the number of airline operators at Bergamo to 14.

It hopes for a further boost with the approval of a new train link from Milan Central Station direct to the airport terminal. "With development plans now in place, Milan Bergamo will be able to offer a vital train connection to downtown Milan, further increasing the airport's catchment area," says the gateway's operator.