As the worldwide fleet of Boeing 737-200s continues to dwindle, one Canadian operator sees a bright future in the aging twinjet.

Canada's Nolinor Aviation, which operates one of the world's largest 737-200 fleets, is investing C$10 million ($7.6 million) to equip 10 of the 40-year-old aircraft with modern avionics and glass displays.

In doing so, Nolinor seems likely to ensure that at least some 737-200s – a type Boeing first delivered in 1967 – remain flying for decades.

The aircraft's analog indicators and spinning gyroscopes will be replaced by Honeywell and Universal Avionics hardware and systems – a technological refresh enabling Nolinor's 737-200s to fly for another 25 years, the company's maintenance production manager Pierre Dore tells FlightGlobal.

"We are basically ripping the guts out and putting in brand-new, off-the-shelf stuff," he says.

"That's why we are still using the old -200s," he says. "Later-generation aircraft are not approved for gravel runway operations."

Based in Mirabel, near Montreal, Nolinor operates passenger and cargo charters, including flights to Canada's far northern regions for mining companies.

The fleet has decreased significantly in size since, shrinking to about 900 in-service aircraft in 1998 and 354 in 2008, Flight Fleets Analyzer shows.

The fleet fell by one on 18 May when a 737-200 operated by Mexico City-based charter carrier Global Air, also called Damojh, crashed near Havana.

Nolinor operates more 737-200s than any other airline – its seven examples account for a whopping 9% of the fleet, data shows.

Nolinor is upgrading the cockpits of the seven aircraft and another three that have not yet joined the fleet, he says. Mid-Canada Mod Center in Mississauga is performing the work.

One aircraft – registration C-GTUK– has already received its makeover, and a second aircraft will enter the shop in August, Dore says.

The first aircraft has been operating without issue since 31 May.

"Pilots are loving it," Dore says.

The flightdeck of Nolinor 737-200 C-GTUK, the first aircraft to undergo cockpit upgrades 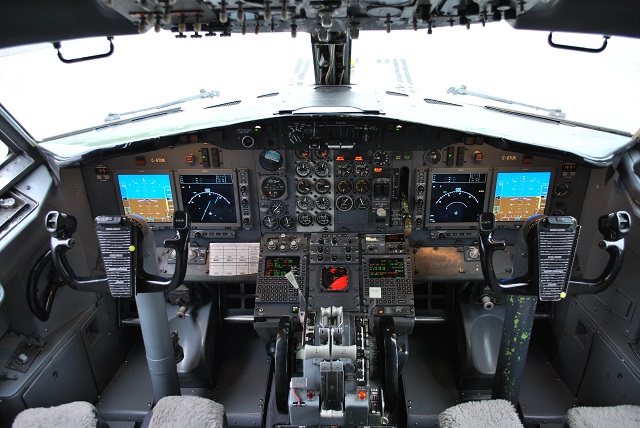 Though other operators have updated 737-200s with electronic flight instrument systems, Nolinor's aircraft are the first to receive Universal EFI-890R displays, Nore says.

The aircraft will also have automatic dependent surveillance-broadcast (out) systems – a requirement for operating in the USA starting in 2020.

The old avionics, some made by long-defunct systems maker Sperry, are prone to maintenance problems, Dore says. Repairs have been difficult and spare parts have been hard to locate.

The new equipment will improve dispatch reliability and provide pilots with better situational awareness, says Dore, noting that the displays can provide overlays of weather, terrain and other information.

"Instead of troubleshooting steam gauges with hundreds of wires, we [can] hook laptops and chat with the aircraft and see what's wrong," he says.