ANALYSIS: US 747s fly into the sunset

An era in commercial aviation will end in December when the last Delta Air Lines Boeing 747 flies into the sunset, ending a near-half-century run for the iconic Jumbo Jet in US fleets.

The aircraft, launched by Boeing and Pan Am in 1966, flew for just about every major US carrier since its introduction in 1970. Long-departed names, from Northwest Airlines to Pan Am and TWA, used the 747 to open markets and extend their networks further around the world.

The in-service fleet of commercial passenger 747s in the USA peaked at 130 in 1990, Flight Fleet Analyzer shows. American Airlines, Continental Airlines, Northwest, Pan Am, TWA and United Airlines all operated the type, including the then-new 747-400, at the time.

That number had dwindled to just 27 last year, as Delta and United – the last two US passenger operators of the jumbo – gradually retired their 747 fleets.

As with any aircraft type, the gains from the 747-400 when it was introduced in 1989 have been superseded by newer widebodies that boast many of the same efficiency and range gains that the -400 did on its debut.

Delta is replacing its 747-400s with Airbus A350-900s and United, which retires its last 747 after a recreation of its first Jumbo Jet flight from San Francisco to Honolulu in November, with Boeing 777-300ERs. To date, neither have used these newer models to open routes, though both tout significant cost savings and benefits to their bottom lines.

"It's a bittersweet milestone – [the 747] with its unmistakable silhouette once represented the state of the art in air travel," wrote United president Scott Kirby in a January letter to employees announcing the retirement plans. "Today, there are more fuel-efficient, cost-effective and reliable widebody aircraft."

After Northwest introduced the 747-400 in early 1989, its then-chief executive Steven Rothmeier touted operating costs 17% lower than the 747-200's and improved capabilities that would allow it to fly in strong headwinds from New York to Tokyo with a full load of passengers and freight, in an interview with Flight International in June that year.

"That aircraft will set the economic pace till the end of the century," he said, a prescient view of the type that did set the standard for widebody travel into the 2000s.

Northwest was the launch customer for the 747-400, placing an order for 10 in October 1985, and United followed suit with an order for four that November, the Flight International archive shows.

Northwest would ultimately take delivery of 16 747-400s from Boeing, and United 44, the airframer's orders and deliveries database shows.

In addition, the -400 was the first 747 with a two-crew cockpit. Boeing eliminated the need for a flight engineer with its engine indicating and crew alerting system (EICAS), a technology pioneered on the 757 and 767, as well as other automation improvements.

The move to just two pilots was called a "quantum leap" in technological advancement, and a significant cost savings for airlines, by Flight International in its 747-400 flight-test report in November 1988.

"The 747, especially the -400 series, gave Northwest at the time... an aircraft with range and scale that hadn't been possible before and was instrumental in making Asia more accessible to the flying public in the US," says Bob Cortelyou, senior vice-president of network planning at Delta. For example, the Detroit-Nagoya route launched by Northwest in 1998 was made possible with the 747-400, he says. 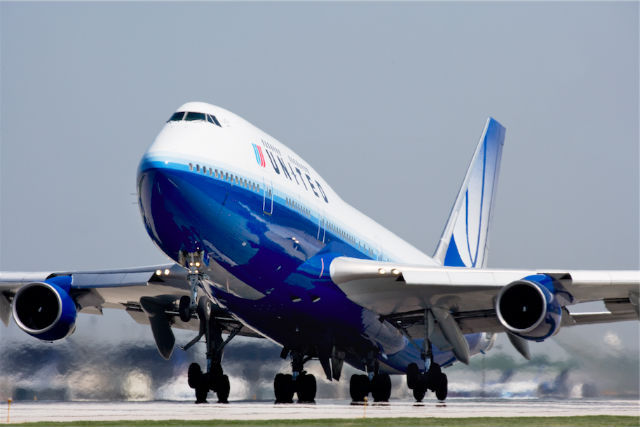 United similarly used the 747-400 for performance gains and to open long-haul markets. The capabilities of the -400 allowed it to replace the smaller 747SP – 11 of which were acquired from Pan Am along with the latter's Pacific routes in 1986 – by 1993 and open new markets like the Chicago-Hong Kong route that began in 1996.

The Chicago-based carrier also has the distinction of having operated every 747 variant with the exception of the 747-300, which no US airline flew. It took its first 747-100 in June 1970 and has operated the iconic jumbo ever since.

"The 747 is a wonderful, wonderful airplane to fly," says United treasurer Gerry Laderman. "It's just not the best airplane to operate [today] because the operating economics are just not as attractive as current-generation widebody aircraft."

Both Delta and United expect significant gains from their respective transitions to the A350 and 777-300ER. Airline executives tout cost savings, as well as operational and passenger benefits, from the shift.

The A350 will be "immediately accretive into the Pacific operations with much, much better efficiency and much better revenue performance" than the 747, said Delta chief financial officer Paul Jacobson in May. He even attributed the majority of a forecast 1.5% improvement in fuel efficiency across the airline's 865 aircraft-strong mainline fleet in 2017 to the widebody transition.

Delta's A350s enter service with its latest business-class product, Delta One suites, and new premium economy cabin on flights between Detroit and Tokyo Narita on 30 October. The aircraft will have 306 seats, split between 32 in business, 48 in premium economy and 226 in economy.

Delta has not named any new routes for the A350, only replacement services, but executives have said that later deliveries of the 15 due by 2019 could be used for long-haul growth. 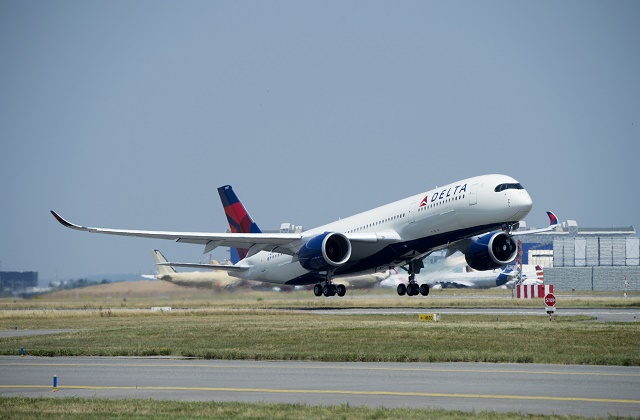 United sees similar benefits from its move to the 777-300ER. Kirby, in his January note, emphasised improved fuel efficiency, cost effectiveness and operational reliability from the transition.

The operational reliability gains of the 777 is about a percentage point or two better than the 747, says Laderman, adding that the type complements its existing fleet of 74 777-200s. "It's always better to have fewer families of aircraft, so being able to add a 777-family aircraft and remove a fleet type will create greater efficiency [and] greater flexibility," he says.

United will operate 18 777-300ERs by the end of 2018, with the aircraft either directly replacing 747s or being used to upgauge existing 777-200 routes. As at Delta, the 777s are line-fit with United's latest premium product, Polaris, in a 366-seat configuration with 60 in business and 306 in economy, including 102 extra-legroom seats.

United is using its Boeing 787s, rather than the 777-300ER, for network growth. This includes new ultra-long-haul routes to Singapore from both Los Angeles and San Francisco, and Sydney from Houston, all operated with the -9.