ANALYSIS: Why Europe's combat aircraft market is worth fighting for

With the Dassault Rafale, Eurofighter Typhoon and Saab Gripen – plus Lockheed Martin's incoming F-35 – dominating the fleets of many European nations, it would be easy to overlook the multiple other sales opportunities the continent holds for combat aircraft manufacturers.

Flight Fleets Analyzer shows that the trio of locally-produced fighters are already in the inventories of nine nations in Europe, with a combined 619 examples in use. The Eurofighter consortium has supplied partners Germany, Italy, Spain and the UK, plus export customer Austria, with our data showing that 361 of the aircraft are operated by the nations. There are 122 Gripens flying in the Czech Republic, Hungary and Sweden, while the French air force and navy can call on a current 136 Rafales. 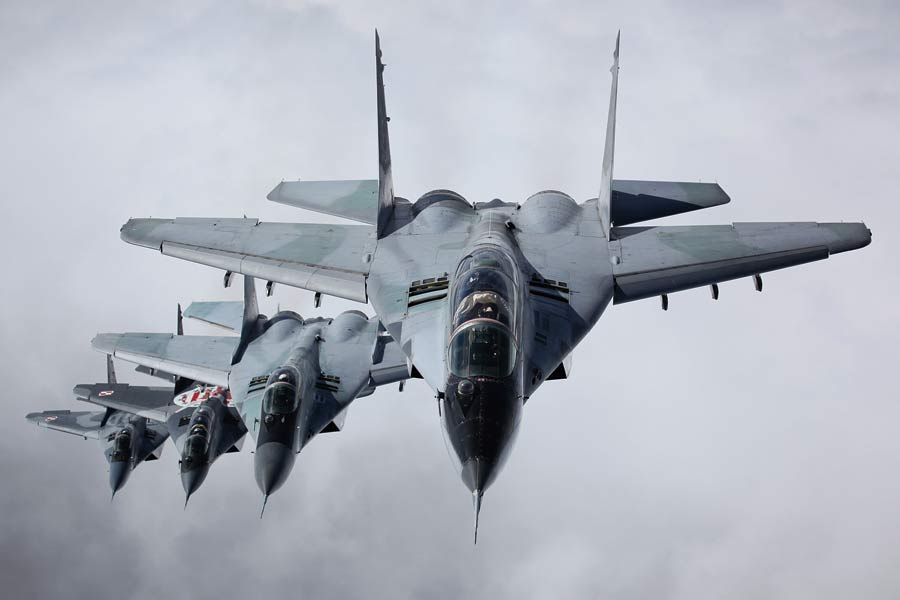 According to their long-term plans for the F-35 programme, Denmark, Italy, the Netherlands, Norway, Turkey and the UK have a total need for more than 420 Lightning IIs.

Beyond such fleet plans, there are at least another 10 European countries with current, emerging or future fighter needs. Taken together, these have 331 airframes in need of replacement, Fleets Analyzer shows. The level of capability to be sought will vary from performing domestic air policing duties to multi-role combat operations, and budget allocations will range from allowing nations to acquire refurbished second-hand equipment up to top-end, new-build fighters.

The trio of European designs can be expected to contest many of these requirements, along with the F-35 and Boeing's F/A-18E/F Super Hornet. But for NATO members, or those with Partnership for Peace status, it seems doubtful that Russian-built models from RAC MiG and Sukhoi will be considered. 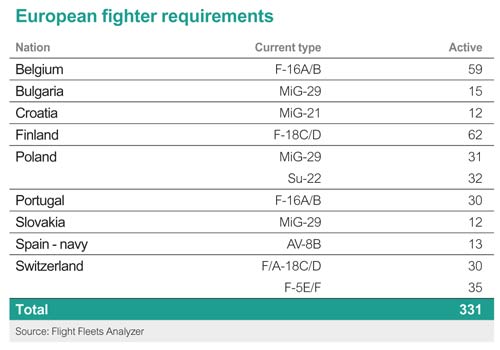 Near-term prospects exist for the Gripen C/D in Bulgaria and Slovakia. Having received responses early this year to a request for proposals for a MiG-29 replacement, Bulgaria's outgoing government in April signalled its preference for the Saab-built type, but the intentions of a new administration have yet to be revealed. Sweden also remains in discussions with Slovakia over a possible Gripen C/D deal. This process has been under way since 2015, with an updated offer tabled last November.

Saab is looking to strengthen its offering to central and eastern European nations by proposing a local maintenance and support presence. It lists Croatia as another potential future operator of the single-engined type.

"Armed forces demand extremely capable, high-performance systems – they want everything," says Richard Smith, Saab's head of sales and marketing, Gripen, who notes that this can exceed the limits of constrained budgets. For the Bulgarian contest, its new-build C/D proposal was considered against offers of ex-US Air Force F-16s offered in conjunction with the government of Portugal and Tranche 1 Typhoons promoted by Italy. It is also seeing former-Israeli air force F-16A/Bs offered in other nations.

Poland has an emerging need to replace its MiG-29s and Su-22s. Defence ministry officials have discounted the possibility of acquiring secondhand F-16s, pointing to the cost involved in a recent Romanian acquisition of the type.

Finland needs a successor for its F-18 Hornet fleet, and recently received information from five candidates for its HX programme: the F-35, Gripen E, Rafale, Super Hornet and Typhoon. Helsinki's lengthy process should see a request for proposals issued next year, before it selects a candidate in 2021.

Fellow F-18 operator Switzerland also is looking to commence a process to replace both its F/A-18C/Ds and Northrop F-5s. The nation – which saw a previous selection of the Gripen E discontinued after a public referendum – needs a replacement air policing capability, with its Hornets to potentially fly on until 2030.

Meanwhile, Lockheed appears to be well-placed in Belgium, although it may well face competition. A current F-16 user, Brussels has signalled a desire to cooperate more closely with the Netherlands, including by jointly providing quick reaction alert cover. One way of ensuring shared capability would be for Belgium to follow its neighbour in acquiring the Lightning II.

Fellow F-16 operator Portugal also could emerge as a potential future customer for the conventional take-off and landing F-35A, while any call from the Spanish navy to replace its Boeing AV-8B carrier-based fighters would attract a bid based on the short take-off and vertical landing F-35B.

With such prospects on offer, the European combat aircraft market remains well worth fighting for.