GE Aviation confirms it has “discontinued work” on its Affinity supersonic powerplant following the collapse of its only customer, Aerion.

The Reno, Nevada-based supersonic business jet developer announced on 21 May that it was shutting down after failing to generate enough cash to continue its AS2 programme. 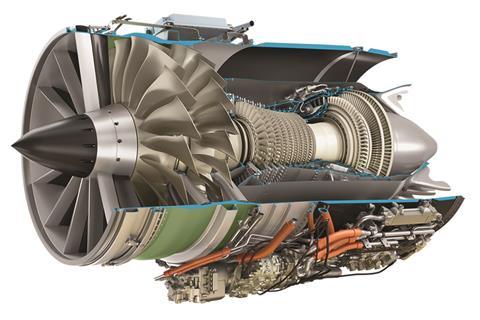 The propulsion specialist hailed the Affinity as “the first civil supersonic engine in 55 years” when it unveiled the product in October 2018, with a view to powering the trijet AS2’s first flight in 2023.

GE described the twin-shaft, twin-fan Affinity at the time as “a new class of medium bypass ratio engines that provide exceptional and balanced performance across supersonic and subsonic flights”. It added: “The Affinity integrates a unique blend of proven military supersonic experience, commercial reliability and the most advanced business jet engine technologies.”

GE and Aerion began working on the engine’s configuration in May 2017. A design review had been scheduled for 2020, after which “detailed design and test article production” was to have begun, but GE had not provided any update.

GE does say, however, that engineers working on the Affinity programme have been “reassigned to other projects” with no impact on employment numbers.

With GE seemingly out of the supersonic race for now, Rolls-Royce remains the strong contender to power rival Boom’s in-development Overture faster-than-sound airliner. Last year, the UK company said it was working with the Denver-based start-up to “explore the pairing of a Rolls-Royce propulsion system” with the Overture.

More than half a century ago, Rolls-Royce with French partner Snecma developed the Olympus engines that powered the Aerospatiale/BAC Concorde.

However, Boom does have an existing relationship with GE, as the latter’s J85-15 engines will power the XB-1, a demonstrator that Boom unveiled in 2020 and plans to fly by early next year.

A third US-based supersonic developer, Spike Aerospace, has not yet announced an engine application for its S-512, a twin-engined jet it hopes to certificate by 2028.