Safran has secured a credit line of €500 million ($600 million) from the European Investment Bank (EIB) to fund research into “innovative propulsion systems” for the next generation of single-aisle airliners.

To be carried out predominantly in France, the project has four main goals, says Safran: maximise propulsion efficiency; optimise energy management; develop disruptive technologies; and integrate them into aircraft. 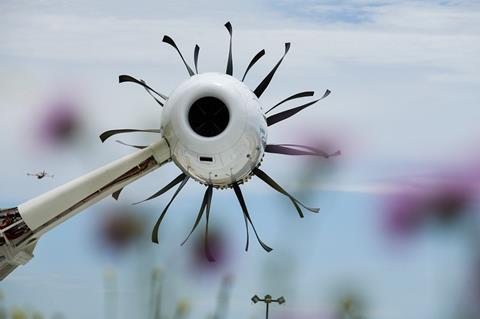 “By combining these four aspects, the next generation of airplanes will be able to fly using only alternative fuels,” says the company.

Safran chief executive Olivier Andries recently said that it had begun early development activities on a new engine alongside GE Aviation, its partner in the CFM International joint venture.

This “next-gen” powerplant will enter service in around 2035 and would be 20% more efficient than current narrowbody engines.

Featuring “disruptive technologies and disruptive architectures”, the engine would be able to burn 100% sustainable aviation fuel. Hydrogen is also being investigated as a fuel source.

The EIB credit line is available from now until September 2022 and will have a maturity date of up to ten years.

Safran in 2009 received €300 million from the EIB to help develop the CFM Leap engine.

The EIB recently rebranded as a “climate bank” with the purpose of supporting the transition towards a green economy.