Lockheed Martin plans to manufacture between 133 and 139 examples of its F-35 stealth fighter in 2021, a number about the same as 2019 levels, but below previous projections as the programme continues to feel the lingering effects of the coronavirus pandemic.

The lower number of deliveries is part of the “process of recovering from the disruption of Covid”, said Bridget Lauderdale, vice-president of the F-35 Lightning II programme, at the company’s final assembly and check out facility in Fort Worth, Texas on 10 June. Lauderdale was named the head of the programme in April. 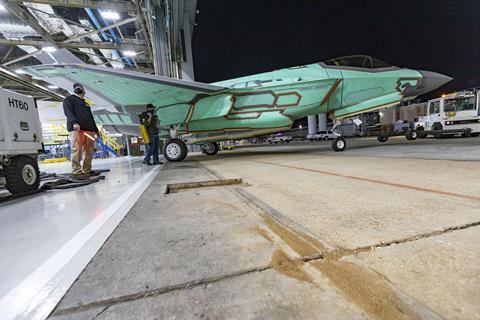 Lockheed describes a process of “production smoothing” where it is trying find the most efficient way to ramp output.

“We’re in the midst of working with our [F-35] Joint Program Office customer on defining what that rate looks like going forward,” says Lauderdale.

The manufacturer delivered 120 examples of the F-35 in 2020, down from its initial projection of 141 jets. Last year, coronavirus health and safety restrictions impeded production at Lockheed and its suppliers at times. Coronavirus-related financial difficulties for many of the company’s small business vendors also created delays.

“The line is stabilising and the supply basis [is] stabilising,” Lauderdale. “We expect to be able to ramp back up.”

At what production level the Joint Strike Fighter ultimately peaks remains an open question, however. Before the coronavirus pandemic Lockheed had talked about producing 155 fighters in 2022 and then more than 170 units in 2023.

“What we’ve been looking at with the customer community is, what is the optimal rate, from an efficiency, from a cost perspective, from ensuring absolutely the quality we stand behind each and every delivery?” says Lauderdale. “There are choices to be made there.”

To make up for production lost in 2020 and 2021 – between 37 to 43 jets – Lockheed is talking to the F-35 Joint Program Office about ways to spread out the backlog over the next four to five years.

“Think of that as leveling out the peaks and troughs year-by-year in the production quantities, which will bring a lot of benefits to our factory, to our workforce, to our supply chain, to get that stability over the next four or five years,” the company says. “The exact quantities, that is pre-decisional. Right now, we’re in the final phases of working that out with the [F-35 Joint Program Office].”

Lockheed expects the number to be somewhere just below 169 units per year.

Negotiations over annual production numbers come as the F-35 is being targeted in the press and by the US Congress over its high hourly operating cost. The jet costs $33,000 per hour to operate in 2012 dollars. Lockheed has set a goal to push that cost down to $25,000 per hour by 2025, but there is skepticism from the US Department of Defense and Congress whether it can reach that number.

In light of the high operating costs, there is a debate about how many F-35s the US Air Force (USAF), US Navy and US Marine Corps should buy. For example, in 2020, the USAF placed an order for eight Boeing F-15EXs, the first lot of a planned total acquisition of 144 examples of the fourth-generation fighter. Previously, the USAF had planned to buy F-35As, but due to the high operating cost of the stealth fighter the Office of the Secretary of Defense instead directed the service to buy the older, but cheaper-to-fly F-15EX.

While the USAF has not formally cut its planned programme of record for the F-35A, there is widespread suspicion that it is slow-walking its acquisition of the jet until a new fighter comes around: the Next Generation Air Dominance (NGAD) aircraft. The service is working with undisclosed aerospace manufacturers to develop competing versions of NGAD, with one prototype already having reached first flight in 2020. The USAF plans to have NGAD enter service in the early 2030s.

Lauderdale did not speak to the possibility that the US Department of Defense may buy fewer F-35s, but did acknowledge that lower order quantities overall might impact the aircraft’s price. F-35As that are part of production lot 14 are to cost $77.9 million each.

Lockheed believes foreign military sales of the F-35 should pad its backlog.

“With the interest internationally, we believe there will be a strong demand that will allow us to continue to keep moving forward at the kind of quantities we’re talking about,” says Lauderdale.

The F-35 is currently participating in fighter acquisition competitions in Canada, Finland and Switzerland.