Lockheed Martin and Rafael Advanced Defense Systems of Israel signed an agreement to jointly develop, manufacture, support and market the Smart, Precise Impact and Cost-Effective (SPICE) 250 guidance kit to the USA and Poland.

The SPICE 250 glide-bomb kit was developed by Rafael, but is not available for sale to US military services. A partnership with US-based Lockheed could help the company sell the weapon to the Department of Defense (DoD). 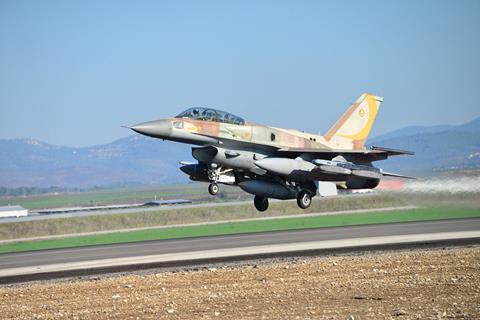 The partnership follows a 2019 deal between the two companies to jointly market the larger SPICE 1000 and SPICE 2000 guidance kits in the USA.

SPICE kits turn unguided, free-falling bombs into precision glide-bombs. The SPICE 250 is intended for 125kg (276lb) bombs. When dropped from a high altitude, the weapon can glide to a target up to 62nm (100km) away.

Rafael calls the weapon “insensitive to GPS jamming”. The system carries an electro-optical/infrared seeker camera that can autonomously identify, track and hit moving targets, allowing the bomb to be guided to its destination without GPS.

“GPS is not required to operate any of the products within the SPICE family, allowing for operations in a variety of locations and adverse environments,” says Alon Shlomi, vice-president of Rafael’s air-to-surface directorate.

The US Air Force (USAF) and US Navy have historically relied on GPS- and laser-guided bombs. However, advanced adversaries such as China and Russia have found ways to jam GPS. In a fight against sophisticated foes, it would also be difficult to get troops close enough to point a laser at targets. In response, the DoD has been looking for alternatives.

The Pentagon is also looking more at glide bombs, including powered variants that use a small jet engine to extend the weapon’s range. Glide bombs would allow a fighter or bomber to launch an attack from a greater distance, potentially outside the reach of enemy fighters or surface-to-air missiles.

The USAF has been working over the past several years to field Raytheon’s GBU-53/B StormBreaker glide-bomb. That 93kg weapon has a 35nm glide range.