The UK Royal Air Force (RAF) has ordered two additional Shadow reconnaissance aircraft from Raytheon UK, in a move that will grow its fleet to eight examples.

The service also plans to upgrade the fleet’s defensive aids systems to help the aircraft defend themselves while operating in unfriendly airspace, the Ministry of Defence (MoD) said on 3 November. The contract with Raytheon UK is worth £110 million ($151 million). 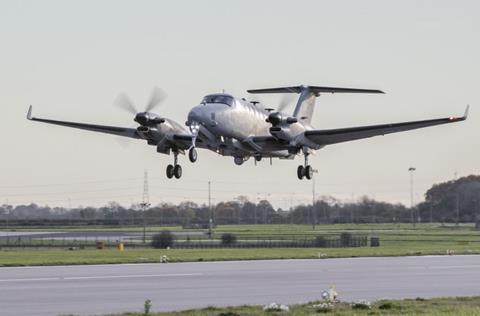 The first upgraded aircraft is due to be returned to RAF duties in June 2023, with the eighth Shadow R2 expected to be delivered by the end of 2025, says Group Captain Shaun Gee, senior responsible owner for the Shadow programme.

Developed to help gather intelligence for the war in Afghanistan, the Beechcraft King Air 350CER-based Shadow R1 carries high definition electro-optical and electronic sensors for surveillance of land targets. The RAF says the aircraft features satellite communication links so that intelligence can be quickly off-boarded during flight for analysis.

The Shadow’s defensive aids system upgrade was to include Leonardo Miysis directional infrared countermeasure turrets, Thales Elix-IR threat warning sensors and Thales Vicon countermeasures dispensing equipment, it was announced in September 2019. The upgrades are intended to guard the aircraft from attack by infrared-guided missiles.

As the UK pivots away from counter-terrorism and counter-insurgency operations in the Middle East, toward potential future conflicts with more advanced adversaries, such as Russia and China, it needs to upgrade its aircraft to deal with more sophisticated weapons.